Distribution stocks products in preparation for a transport strike 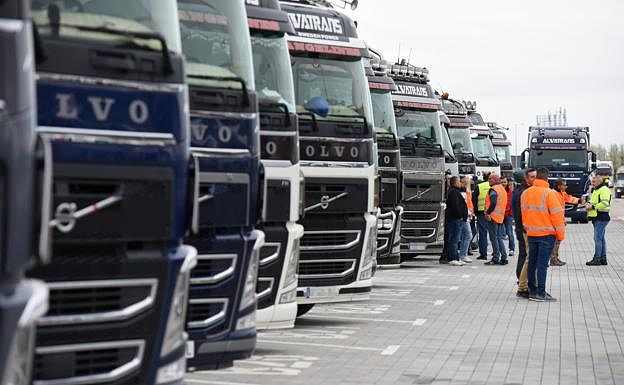 Although the possibility for a strike in transport has been a distant possibility for a few days now, there are great concerns about the potential conflict due to high fuel prices in summer. This could cause a lot of harm to an economy like Almeria's, where tourism and the hotel sector have a great deal of weight.

As representatives from the various productive sectors confirmed to IDEAL yesterday, there is plenty of room for companies to maneuver. According to the Association of Beverage Distributors, companies that are able to stockpile products have a buffer of reaction in case of a conflict cutting off supply routes. Francisco Villacreces, the representative of the Association of Beverage Distributors, stated that they are all stockpiling but that the warehouses have limited capacities. He estimated that the increase in product would be 20, 30, or even 40% depending on the capacity of each warehouse. This will allow them to keep product available for the summer campaign, which accounts for 70% of their annual revenue. He warned that if the strike continues for more than a week, we would run out of stock.

Francisco Garcia, president of the Association of Tourism Promoters of Roquetas de Mar representing the hoteliers, said that the hotels are also trying prepare for the conflict. Although the hotels have large storage areas for non-perishable goods, the problem lies in fresh and frozen products. The chambers are limited in size and must be renewed every two to three days. This would limit the ability of the hotel establishments, Francisco Garcia, to feed their guests in conflict situations this summer.

He said, "We are afraid – he admitted – it is impossible to accumulate fresh. Which is most of what you eat in restaurants, so we are very concerned," and assured the representative of hotels that they depend on the reactions of distributors in their case.

The supermarket chains surveyed said they have not activated any contingency plans due to the delay in the possibility that a transport disruption could occur. However, they don't rule out taking appropriate measures once their request is confirmed. These companies, like the hotels, recognized the fact that there is limited preparation capacity due to the small size of their warehouses. They also fear distribution problems for certain products such as the one they experienced a few months back. The agricultural sector is the one that is most calm at the moment, despite the fact that the campaign is over and that it won't resume activity until the end of summer, according to sources from Coexphal (the Association of Producer Organizations of Fruits and Vegetables From Almeria).

There was very little response to the strike in Almeria a few months back. There are many self-employed workers who are most affected by rising fuel prices because they have limited options. However, large companies in the province employ salaried drivers. These drivers did not join the strikes although pickets were present at distribution points.

Atralme, the Almeria Carriers Association was part of Fenadismer (the National Federation for the Road Freight Transport Sector). Yesterday, it was stated that for the time being, it is decided to wait and see if the negotiations with the Government yield results. Yolanda Aguila (the provincial representative) stated that the "our position was to negotiate" and that it was hoped that arrangements can be made and that measures will be taken to improve the situation. She also acknowledged that a strike would mean "a loss for all sectors".

Atralme was critical, along with the rest of sector, of the Government's measures this weekend. They consider them "insufficient". Because of the rapid rise in fuel prices, issues like the 20c per liter subsidy have become "obsolete". They are demanding a review of the current measures. In light of the dire situation that exists in the province, he demanded that all Administrations be involved, including the Junta de Andalucia and the Diputacion.

Companies such as beverage distributors have confirmed that they are facing great difficulties. According to the president of the provincial association in question, their fuel costs have increased by nearly two-fold in a very short period. Francisco Villacreces stated, "We try to influence it as much possible, but with large multinationals we operate with fixed rates." These companies have continued to operate in the ceasepages of a few month ago, although they admit that it is becoming increasingly difficult.

Transport sector is split by the global crisis caused by rising fuel prices. This is also causing mobilizations elsewhere in the world, such as France. Small businesses and the self-employed, which have less flexibility, are more aggressive in asking for measures. They have delayed the call for strike, at least for this Thursday, while they wait for the Government to respond. They are demanding that they be relieved of the suffering caused by the rise in fuel prices. Large distribution warns them that a strike would only increase the price of their products.

‹ ›
Keywords:
DistribuciónAnteProductosHuelgaTransportesAcopioPrepararse
Your comment has been forwarded to the administrator for approval.×
Warning! Will constitute a criminal offense, illegal, threatening, offensive, insulting and swearing, derogatory, defamatory, vulgar, pornographic, indecent, personality rights, damaging or similar nature in the nature of all kinds of financial content, legal, criminal and administrative responsibility for the content of the sender member / members are belong.
Related News