On Friday evening, former attorney general Jesus Murillo Karam was arrested at his home in Mexico City for "enforced disappearance, torture and offenses against the administration of justice", and did not put up any resistance, said said the prosecution in a press release. 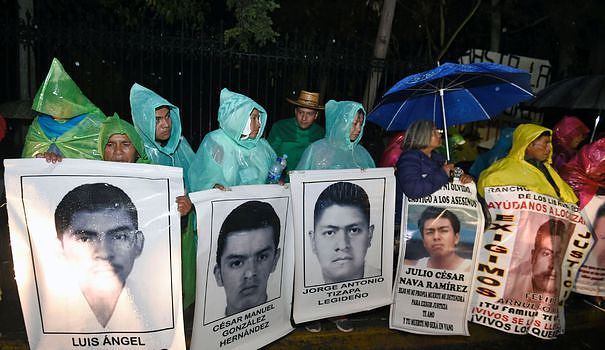 On Friday evening, former attorney general Jesus Murillo Karam was arrested at his home in Mexico City for "enforced disappearance, torture and offenses against the administration of justice", and did not put up any resistance, said said the prosecution in a press release.

The prosecution later announced that arrest warrants had been issued for 20 army officials and 44 police officers for their alleged involvement in the case, which caused deep shock in Mexico and abroad.

These 64 police and military are wanted for "organized crime, enforced disappearance, torture, homicide and offenses against the administration of justice", said the prosecution. The identities and rank of those sought were not specified.

Mr. Murillo Karam, who had served under President Enrique Peña Nieto (2012-2018) and had led a controversial first investigation into these disappearances, is a former heavyweight of the Institutional Revolutionary Party (PRI) which governed Mexico during 71 in continuously until 2000.

This is the most important personality arrested so far as part of these investigations, which had restarted from scratch after the coming to power in 2019 of left-wing president Andrés Manuel Lopez Obrador.

The prosecution has also issued arrest warrants against 14 members of the drug trafficking cartel Guerreros Unidos.

On the night of September 26-27, 2014, a group of students from the Ayotzinapa teacher training school in the southern state of Guerrero traveled to the nearby town of Iguala to " requisition" buses in order to go to Mexico City for a demonstration.

According to the investigation, 43 young people were arrested by local police in collusion with Guerreros Unidos, then shot and burned in a landfill for reasons that remain unclear. Only the remains of three of them could be identified.

Thursday, an official report published by the "Ayotzinapa Truth Commission" set up by Mr. Lopez Obrador had estimated that Mexican soldiers had a share of responsibility in this crime.

"Their actions, omissions or participation allowed the disappearance and execution of the students, as well as the murder of six other people," Interior Undersecretary Alejandro Encinas said during the public presentation of the report.

"An institutional action was not accredited, but there were clear responsibilities of elements" of the armed forces, he added, without specifying whether these "elements" were still active.

Another commission, the Interdisciplinary Group of Independent Experts (GIEI), which was created under an agreement between the Peña Nieto government and the Inter-American Commission on Human Rights (IACHR), maintains that soldiers falsified evidence found in the dump where the bodies were burned.

The first official investigation, directed by Mr. Murillo Karam and whose conclusions were rejected by the families of the victims and by independent experts, did not attribute any responsibility to the military. This version accused a cartel of drug traffickers of having had the students killed by taking them for members of a rival gang.

"Making this atrocious and inhuman situation public, and at the same time punishing those responsible, makes it possible to prevent these deplorable events from happening again" and "strengthens the institutions", affirmed Mr. Lopez Obrador on Friday.

The Mexican president has also indicated that he will continue to urge Israel to obtain the extradition of the former head of the criminal investigation agency of the attorney general's office, Tomas Zeron.

Accused of being involved in the Ayotzinapa affair but claiming his innocence, this former senior official fled to Israel where he requested asylum.