Diplomacy: An isolated Brazil after four years of Bolsonaro's mandate

A country giant in size, and so far respected, Brazil has seen its rank decline in the world during the four years of the mandate of the far-right president, say, unanimously, analysts questioned on its diplomatic record. 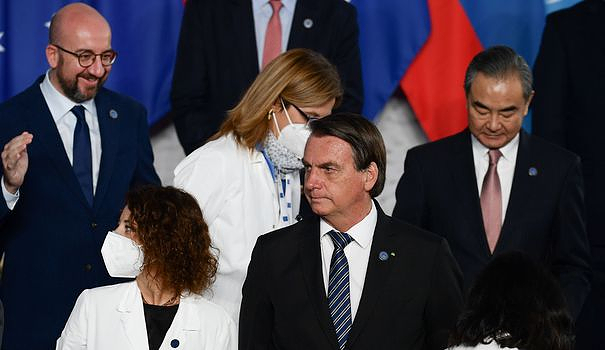 A country giant in size, and so far respected, Brazil has seen its rank decline in the world during the four years of the mandate of the far-right president, say, unanimously, analysts questioned on its diplomatic record.

They invoke his ideological approach to international relations, his innumerable departures from diplomatic usage, his insults, his missteps.

On Sunday, coming to a mourning London to attend the funeral of Queen Elizabeth II, Bolsonaro campaigning for his re-election, thus harangued a crowd of sympathizers from the balcony of the residence of the Brazilian ambassador.

"The country is experiencing relative international isolation and a serious crisis of prestige", for Fernanda Magnotta, coordinator of international relations at the FAAP foundation, in Sao Paulo, "few people want to be photographed with our leaders".

"Decisions are centralized in the presidency": Jair Bolsonaro, "his sons, and his closest advisers who make up the most ideological wing of the government", she explains.

This president, who has traveled very little, has alienated part of the international community on the subject of the environment or human rights and has clashed with China and the Arab world.

He approached a few authoritarian countries themselves isolated: Hungary, Poland and especially Russia, where his visit a week before the invasion of Ukraine was controversial.

Brazil's diplomacy was no longer seen as "a means of economic advancement but as a means of forging far-right alliances for domestic political gains", says Rodrigo Goyena Soares, a historian at the University of Sao Paulo. (USP).

China, its largest trading partner, has been offended by sweeping statements from Brasilia. And the EU-Mercosur agreement was not ratified "due to mutual animosity", says Fernanda Magnotta.

Similarly, Brazil "lost its leading role in regional integration in South America". He was notably angry with the Argentinian neighbor, whose people, had launched Bolsonaro at the end of 2019, "poorly chose" their new president.

The monster fires in the Amazon in 2019 inflamed Bolsonaro's Brazil's relations with Europe, and, to the point of no return, with Emmanuel Macron's France, whose wife Brigitte was insulted on her physical.

Just last month, Economy Minister Paulo Guedes suggested that “insignificant” France “fuck off” if it did not treat its country well.

"It's unheard of in Brazilian diplomacy, and even in diplomacy as such," notes Mr. Goyena Soares.

It was on the United States of Republican Donald Trump that Jair Bolsonaro had bet everything.

The bilateral relationship has been very cold since the accession to power of Democrat Joe Biden, whose Bolsonaro was one of the last leaders to recognize victory, since Trump cried out at electoral fraud.

It was "another serious breach of the Brazilian diplomatic tradition of non-interference", notes Mr. Loureiro.

The appointment in 2019 of Ernesto Araujo Minister of Foreign Affairs, an obscure diplomat passing for an illuminated, had strangled the venerable institution of Itamaraty.

Trump worshiper, anti-globalization, climatosceptic and enemy of "Maoist" China, Araujo had made a turn on the wing in Brazil.

Today, his deputy son "Eduardo has much more weight" than the new head of diplomacy, Carlos França, "very extinct", estimates the analyst.

Often more popular abroad than in Brazil, Lula should "propose a dialogue to all countries, reactivate South-South cooperation with Latin America and Africa" ​​which Bolsonaro has ignored, says Magnotta.

Likewise, he intends to relaunch regional integration and Brasilia's participation in multilateral bodies and climate efforts.

The left-wing leader should also "renegotiate the terms of the alliance with the United States", believes Mr. Goyena Soares, define a real policy with regard to China and "operate a rapprochement with the EU through of the environment".