Dietrich Mateschitz, the discreet Austrian behind the Red Bull empire

Born in 1944 in the eastern region of Styria into a family of teachers, this shy personality was considered in 2022 by Forbes magazine as the first fortune of Austria, estimated at 27. 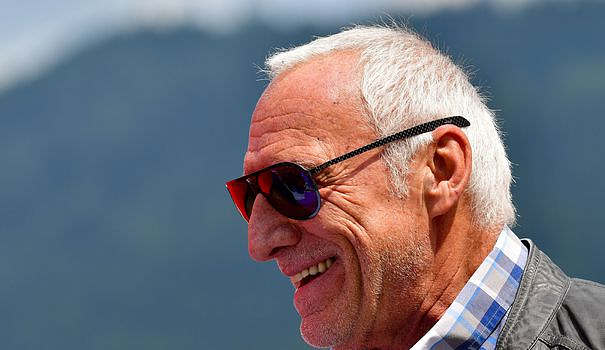 Born in 1944 in the eastern region of Styria into a family of teachers, this shy personality was considered in 2022 by Forbes magazine as the first fortune of Austria, estimated at 27.4 billion euros.

He owned the paradise island of Laucala in Fiji and numerous properties in Austria, where he cultivated discretion.

Never married, always in jeans, graying hair, Dieter Mateschitz will almost never give an interview to journalists. We just know he had a son.

After studying economics, he became marketing director for a toothpaste manufacturer. During a business trip, he discovers a drink that will change his life, at the bar of a Hong Kong hotel.

He is served an energy drink, common in Asia. Conquered, he then bought with a Thai partner, Chaleo Yoovidhya, the rights of the company and founded "Red Bull" - red bull in English - in 1984.

- From the can to extreme sports -

He is 40 years old and it is the beginning of a formidable ascent.

The brand will have its headquarters in a green valley of the Alps, in Fuschl-am-See, from which it will slowly but surely conquer the West.

Today, Red Bull employs more than 13,000 people in 172 countries, with a turnover of around 8 billion euros, and sells nearly 10 billion cans a year.

Dietrich Matechitz had one obsession: the image of his brand, enhanced through the sponsorship of extreme sports and the investment of considerable sums in marketing.

The commercial boom of his drink was driven by this strategy, which culminated in 2012 with the sponsorship of Felix Baumgartner, the first man to break the sound barrier in stratospheric free fall.

With growing success, he gradually entered the more closed world of mainstream sports. Today, Red Bull is a key player in Formula 1: champions Sebastien Vettel, Daniel Ricciardo and Max Vestappen have passed through his team.

After forays into the fields of music and aviation, he ventured into football by buying in particular the club of the Austrian city of Salzburg in 2005 then that of Leipzig in Germany.

Create the event, but control its communication. The first, Mateschitz saw coming the evolution of the media landscape, which in a few years became a world fragmented into a multitude of websites and channels in search of spectacular content.

In 2007, he founded the "Media house" in Austria, responsible for providing thousands of hours of images to interested broadcasters, and also invested in mobile telephony.

Behind the planetary success, difficult to know who was the founder of Red Bull.

In a rare interview with the Austrian daily Kleine Zeitung in 2017, the billionaire criticized the lack of control of the migratory wave in Europe and hinted at conservative positions.

Part of his media empire, present in the Germanic world, has since been criticized for having taken a conspiratorial turn, particularly in the treatment of the Covid-19 pandemic.

In 2021, the Austrian magazine Dossier published an investigation revealing the underside of this impenetrable company, whose sports marketing would hide the harmfulness of the drink.

He also revealed the lobbying played by the Austrian diplomacy with States wishing to regulate the consumption of energy drinks, accused of being dangerous to health in the event of overconsumption.