L'Express learned from a judicial source that Didier Raoult, former director of the IHU Méditerranée infection, was indicted in April 2022 for public defamation. 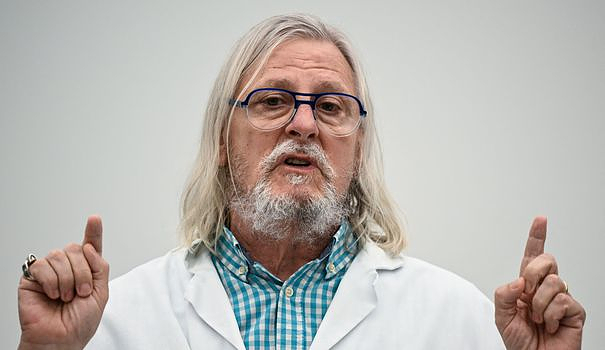 L'Express learned from a judicial source that Didier Raoult, former director of the IHU Méditerranée infection, was indicted in April 2022 for public defamation. The complaint was filed with the Nanterre prosecutor by Lonni Besançon, a researcher critical of the work of the Marseille professor. It targets the remarks that Didier Raoult made in a video broadcast on the YouTube channel of the IHU Méditerranée infection on June 1, 2021 and viewed 1.2 million times. "There is another who writes stuff, who even offered to send a suicide car to the IHU, his name is Lonni Besançon, but who are these people? What are they recruiting in psychiatric hospitals?", Launches the Marseille professor, from 31 minutes and 30 seconds.

"We are in the textbook case of defamation: not only is it objectively established that my client never said, wrote or planned to commit an attack against the IHU, but in addition, it is a very serious accusation in the current context of the fight against terrorism that we know. This irresponsible behavior must be sanctioned by the judiciary, "said Lonni Besançon's lawyer, Me Pauline Ragot. Didier Raoult's accusation seems to refer to a tweet, since deleted, published by the Twitter account @Mau_Adrien. "But how? Suicide attack against Raoult? Boycott of CNews? Twitter and write to inform? The choice is vast", indicated the message. "Mr. Raoult could not ignore that this tweet had not been published by my client, since his closest supporters - including his ex-right-hand man Professor Eric Chabrière - had themselves relayed the initial tweet upstream, which did not was not the work of Mr. Besançon, adds Mr. Ragot. This accusation caused considerable personal and professional harm to my client."

Also interviewed by L'Express, Lonni Besançon confirms having received many insults on social networks, but also messages sent directly to Monash University (Australia) where he was working at the time. "It's very serious, I'm being accused of terrorism! And pro-Raoult accounts on Twitter, including "Le Professionnel" (since suspended), have also accused me of being a collaborator, a Nazi, but also a sexual aggressor and have, each time, mentioned my university, he says. Fortunately, I was supported by my employer, but it generated a lot of stress."

Lonni Besançon is a researcher in "human-computer interaction" who completed his thesis at Paris-Saclay in 2017. From the start of the Covid-19 crisis, he was passionate about analyzing scientific studies, participating to various "debunking" of untruths. "At the time, I simply asked myself: how can I help my colleagues in the face of this pandemic?", He explains. He notably looked into the work of Professor Raoult and detected anomalies in several studies, including those on hydroxychloroquine, presented by the Marseille professor as the remedy for Covid-19. He also published a scientific study which reports that many works on Covid-19 - including some from the IHU - appeared in scientific journals only days after their receipt, while the proofreading process normally takes several months or even several years.

But it is undoubtedly an open letter that most attracted the attention of the Marseille professor. “My client obviously drew the wrath of Mr. Raoult when he co-wrote, with several other scientists, a letter supporting Elisabeth Bik”, advances Me Pauline Ragot. Ms. Bik is a Dutch researcher specializing in the fight against scientific fraud who revealed irregularities in IHU studies and against whom Didier Raoult filed a complaint. An attempt "to judicialize the scientific debate" denounced by the CNRS and the ENS, but also by many researchers. The open letter co-written by Lonni Besançon has thus been signed by more than 2,000 international scientists and has been relayed by major scientific journals - Nature News, Science News - and many media, including the BBC, The Guardian, etc. "His threat of a lawsuit against Ms. Bik deeply annoyed me, because she is a great researcher. And in the face of scientific problems, one normally responds with science and not with the legal process. J I then co-wrote this letter and, the following week, as if by chance, he confused me with Adrien Mau and accused me of wanting to commit an attack", explains Lonni Besançon.

In the case of a complaint for defamation, the indictment is automatic if the author of the contested remarks is identified and it is proven that they were indeed pronounced, which is the case in this case. The case is now in the hands of the Nanterre court. The investigating judge can now order the dismissal or referral to the criminal court. If the dismissal is pronounced, it will be the first defamation lawsuit against Didier Raoult. But this procedure could mark the beginning of a long series. Because, according to information from L'Express, other complaints have and will be filed against members or ex-members of the IHU, including Didier Raoult and Eric Chabrière. The latter is also suspected by several victims of harassment of being the owner of this anonymous account "The Professional", which sent hundreds of accusatory or abusive tweets to critics of the IHU.

For his part, Didier Raoult has also filed numerous complaints against his detractors, including Karine Lacombe, infectious disease specialist at Saint-Antoine hospital (AP-HP, Paris), Jean-Paul Stahl, infectious disease specialist at Grenoble University Hospital and member of the French-speaking Society of Infectious Pathology, Leonid Schneider, biologist, Ukrainian-German scientific journalist specializing in scientific fraud and Alexander Samuel, a doctor in molecular biology. Whistleblowers who were among the first to denounce the anomalies coming from the studies of the former director of the IHU. "Our complaint is part of the more general framework of denunciations of the pernicious and unacceptable methods used by Didier Raoult and his entourage to silence any scientific opposition", notes Me Pauline Ragot. "It's not a gag procedure", refutes Me Brice Grazzini, Didier Raoult's lawyer, questioned by Nice Matin about the complaint against Alexander Samuel. Contacted by L'Express, the advice of the Marseille professor has not yet answered our questions.

In addition to these defamation proceedings, a judicial inquiry against the IHU was opened at the Marseille public prosecutor's office in September. It follows the vitriolic investigations and reports of the French Medicines Agency and Igas, which discovered faulty management and the behavior of the management team "generating malaise at work, even harassment", medical prescriptions contrary to the Public Health Code, or publications of scientific studies of poor quality or without legal authorisation. Irregularities partly revealed by whistleblowers, but also by L'Express investigations.