Deux-Sèvres: the fight against "basins" is a long-term one

After a demonstration of several thousand people on Saturday, and violent clashes with the police, some of the activists remained on Sunday near the site, denied access by some 1,500 gendarmes. 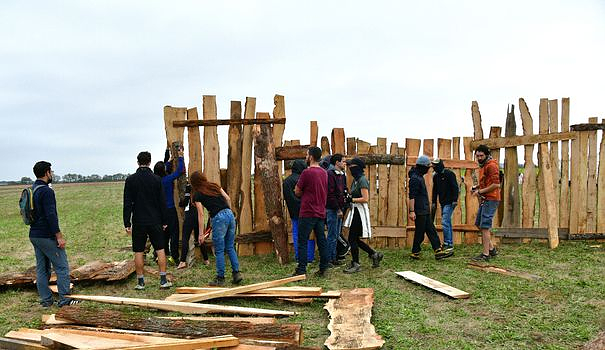 After a demonstration of several thousand people on Saturday, and violent clashes with the police, some of the activists remained on Sunday near the site, denied access by some 1,500 gendarmes.

The anti-basins collective, nickname given to these reservoirs, occupies land lent until May 19 by a farmer opposed to the project.

"We fully intend to use it. It will be the starting point for a whole host of harassment actions that will be carried out if the work were to continue", declared Julien Le Guet, door- word of the collective.

"We are urgently awaiting a sign from the State and clearly, if in the coming days, we do not have an announcement of a moratorium, a review of the project, we trigger the device", he said. added.

For now, opponents have taken root by building watchtowers.

“We are building a lookout to anchor the fight on this ground, to be able to see the enemy coming,” David, a 43-year-old peasant baker who requested anonymity, told AFP, referring to “the 'collective imagination' of the 'village of Gauls'.

"This watchtower will be transformed into a fort and permanently if the construction of the basins resumes in Sainte-Soline (...) We are on the rear base of the area to be defended", he assured.

Saturday, 4,000 people according to the authorities, 7,000 according to the organizers had gathered in Sainte-Soline, east of Niort, to protest against the water reserve under construction, one of the 16 planned in the department.

The project was developed by a group of 400 farmers with the aim of reducing their water withdrawals for irrigation during the summer, thanks to the pumping of surface water tables in winter.

These reservoirs, whose capacity reaches 650,000 cubic meters - the equivalent of 260 Olympic swimming pools - are denounced by their detractors as a "grabbing of water" by the agro-industry, that of corn in particular, coupled with an ecological aberration in times of global warming.

Violent clashes erupted on Saturday with the 1,500 gendarmes mobilized when demonstrators wanted to enter the site, which was forbidden to access. Some of them succeeded before being repelled.

"A historic day", according to the collective "Bassines non merci", while the prefect of Deux-Sèvres, Emmanuelle Dubée, spoke of "success" for the police.

Sunday, the gendarmerie device was maintained but no new intrusion attempt took place.

Hooded activists, in overalls and equipped with a grinder, shovels and pickaxes, on the other hand cut a pipeline supposed, according to them, to supply the future reserve from the drilling of a farmer involved in the project.

According to a source close to the safety device, the pipe in question was not connected to the basin but fed the property of a farmer doing polyculture.

This weekend of mobilization, after a first in the spring in the department, comes as the historic drought of the summer has crystallized the tensions around the basins and, beyond, the uses of water.

The Minister of Agriculture, Marc Fesneau, defended on Sunday an "authorized" and "general interest" project, in the face of which the demonstrations must stop. "To see environmentalists going to attack projects which in reality make it possible to better regulate our water consumption, it's crazy", estimated the deputy LR of Lot, Aurélien Pradié.

EELV MP Sandrine Rousseau, who took part in Saturday's demonstration, like MEP Yannick Jadot, on the contrary gave her support to "activists who occupy the land (...) to show that these projects send us into the wall".