Demonstrations of bikers to say "no to technical control"

They were 1,400 in Lyon, 900 in Toulouse or 850 in Bordeaux according to the figures of the respective prefectures. 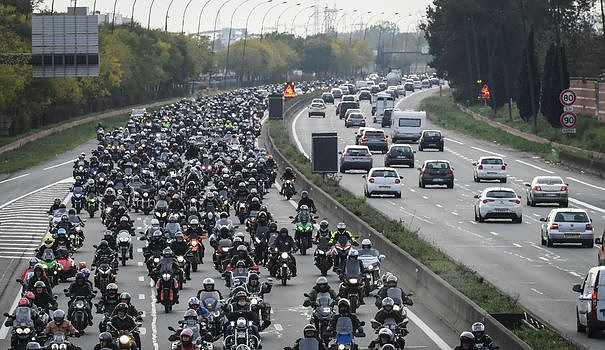 They were 1,400 in Lyon, 900 in Toulouse or 850 in Bordeaux according to the figures of the respective prefectures.

In Toulouse, the procession of vehicles came together at the call of several federations of motorcyclists in the region, before taking the A64, called the "Pyrénéenne", and then heading towards the ring road at low speed by making rev their engines.

In the Ville Rose, the mobilization also concerned the establishment of a ZFE, which will lead to the banning of cars and two-wheelers certified Crit'air 4, 5 and unclassified (the oldest vehicles) from the 1st January 2023.

On their arrival in the center, the demonstrators headed in a relaxed atmosphere and on foot towards the Administrative Court, in front of which they displayed a coffin and posters bearing the slogans "technical control, too many lies" or "I control, you controls, they get rich".

"It is in these moments that we can show our strength", reacted for AFP Marianne Grand, coordinator of the FFMC33 who intends to "continue the battle".

The call for mobilization was followed in several other major cities in France such as Lyon where 1,400 participants left Place Bellecour to go to the prefecture, while 400 people demonstrated in Perpignan.

In the North, they were 650 in Lille, according to a police source, gathered around 3:00 p.m. Place de la République near the prefecture.

With AFP, Philippe Maussion, coordinator of the FFMC59, called on the State not to "give in to Parisian pseudo-ecologist associations whose sole purpose is to drive out everything that is motorized from Paris".

In Rennes, 350 to 400 bikers gathered in front of the Ille-et-Vilaine prefecture at the start of the afternoon, also from the neighboring departments of Morbihan and Côtes d'Armor.

"We are here to encourage the government to continue its efforts on alternative solutions to the compulsory technical control for two wheels," Philippe Jéhanno, event coordinator for the FFMC 35, told AFP.

"Technical control will be ineffective in terms of safety. In ten years, the number of two-wheelers has increased by 30% while mortality has dropped by 19%. We are the good students of road safety", he says. .

The FFMC of Ille-et-Vilaine must be received Thursday at the prefecture to address issues specific to the department, in particular related to security, he specified.

In a judgment of October 31, the Council of State reinstated the technical control for two-wheelers, a European obligation whose application was planned for the beginning of 2023 before its cancellation by the government.

A week earlier, more than 1,500 bikers from several departments in the south of France marched in Montpellier to protest against this measure.

Other demonstrations are planned this weekend, including one in Paris and Marseille on Sunday.