Death of Elizabeth II: the foreign press pays tribute to "the queen of two centuries"

"The nation was changing. 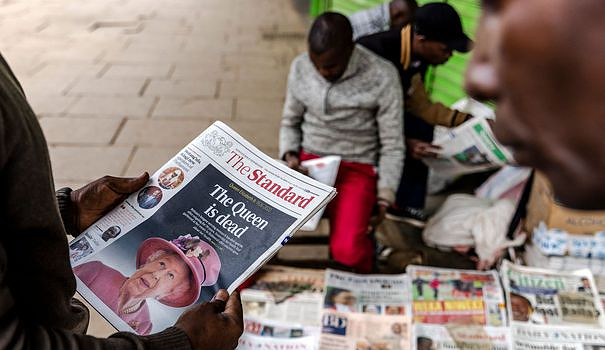 "The nation was changing. She was not." To measure the strength of an earthquake, you must first observe its center. In the United Kingdom, a country mired for several weeks in a social crisis linked to inflation and the surge in energy, the event is undoubtedly the most commented on for decades. Information has driven out all the others and special editions of television channels, tabloids and daily newspapers follow one another.

The sentence printed in the pages of The Times, which chose to illustrate the death of Elizabeth II with a photograph of the Queen in the strength of her first years of reign, sums up the tone that runs through British newspapers. The Guardian has chosen to accompany its front page an illustration of the young sovereign, wearing the royal crown and perched on her throne. The Independent also takes up the illustration and is content to inscribe at the bottom of the page the dates of life of Elizabeth II.

On the inside pages, analyzes gradually take precedence over retrospectives. “The fact that she viewed her position not as an honor, a privilege or even a calling, but as a sacred duty, means that she never backed down from her commitment to service,” notes the Times. A Guardian columnist insists on the unifying figure embodied by the queen, relying on a pretty formula: "She was sewn into the fabric of our lives so completely, that we had ceased to see the threads since a long time. It wasn't just coins, banknotes and postage stamps."

Tributes quickly spread across Europe. In Italy, the daily Corriere della Sera insists on the heritage of the regent of Great Britain by presenting her as "the queen of two centuries". In Spain, the country's first daily website opens on the royal disappearance and gives pride of place to the event: it titles "Mother Elizabeth II".

A few hundred kilometers away, in Switzerland, the daily Le Temps has chosen to combine its front page with the past with a sober "It was the queen". The full page gives way to a main article which returns to the link which united the Queen with the British people. The editorial of the newspaper also sees in the death of the "beloved sovereign", as it was presented by her son Charles on the announcement of her death, "the final mourning of the past greatness" of Great Britain . The idea that the disappearance of Elizabeth II will be accompanied by major political upheavals within the country of the crown is shared by a large number of newspapers, which look into the style of the future exercise of King Charles III.

The rain of tributes and testimonies is also falling on the other continents. In the United States, the New Yorker dresses in the colors of the British flag. The queen holds the main square in the center. Time is part of this sobriety. Further south, El Mercurio, in Chile, advances on its cover page: "the monarch who has become a pillar of democracy". The titles of the African or Asian press also largely covered this event with international repercussions.