Death for Ukraine at 21: Teodor, the unknown soldier told by his mother

"Teodor was my third son. 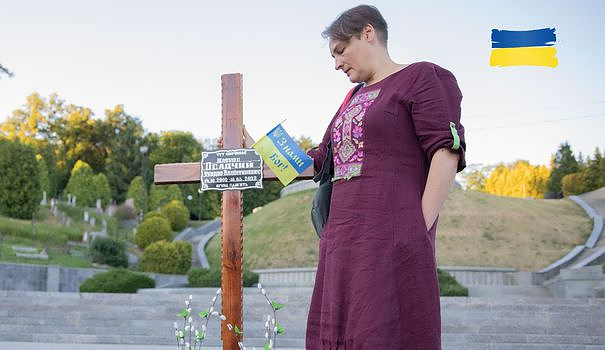 "Teodor was my third son. He died for his country at the age of 21, on March 18, and no one can ever replace that void. Since childhood, he dreamed of becoming a soldier. He was a calm and gentle boy, who became very strong mentally growing up. Two days before his 21st birthday, on October 12, he signed a three-year contract to join the army. He was proud, and very happy. Also happy to have a good salary, to to be able to pay for his studies himself later - he didn't want to inflict that on me (I raised the siblings alone).

I said goodbye to him on October 23. I quickly took him in my arms and said 'go'. It was the last time I saw him. He wanted to fend for himself in the army, that I let him become a man. From November to January, they were sent to barracks near Kherson, where they underwent intensive training. One of the exercises, which was very hard, consisted of staying twenty-four hours on a battlefield, at minus 20°, with a big backpack.

They then left for Mykolaiv, in the 36th Marine Brigade. On February 24, at 5 am, Teodor called me to tell me that the war had started. No one expected it to burst. Now we realize that before February 24, it was paradise. One of the first things he told me was to contact his girlfriend, Yulia, and leave Ukraine with her, for Europe.

But he was still trying to reassure me about his situation. Often he wrote in his texts '4.5.0', which means in military language: 'everything is calm'. Here are others: 'I survived, I am alive'; 'Glory to Ukraine, Mom!!' ; 'We counter-attacked in Mykolaiv. So far so good'; 'I will not flee to the infirmary'; 'Marines Don't Give Up'; 'Russian soldiers are demoralized'; 'There will be protests in Russia, and then they will wake up'. He lived the war with great dignity. One day he sent me this message: 'It is better to die standing than to live on your knees'.

On March 17, I felt very anxious in the evening. I hadn't heard his voice for a long time. It was forbidden to call them, but I did around 10 p.m. We talked for ten minutes. He was very calm, I didn't sense any anxiety in his voice. However, in the previous days there had been terrible battles in his area, and they had lost many men. It was only later, talking to other soldiers' mothers, that I became aware of the reality. The danger was such that they could die at any time from the first day of the war.

On Friday, March 18, he did not respond to my messages. I figured he might not have a connection. In the evening, I read that a barracks had been bombed near Mykolaiv, but it was not his. I tried to call him, he didn't answer. His last message was: 'Everything will be fine. I love you, I kiss you'. I was looking for information everywhere. The next day I started to panic. I called a senior officer, who said to me: 'Pray, and keep hope'. On Monday, I joined a group on Facebook, where a large number of mothers were looking for their son. The following Wednesday, I received a call telling me that Teodor had died on the morning of March 18. His barracks had been hit by multiple rockets.

During the funeral mass, his former teachers were all on their knees, it upset me. The place where he is buried, in the cemetery of Lviv, is called 'the alley of glory': it is also there that the soldiers who died in 2014-2015, in the Donbass, rest. Théodore was born in a maternity ward located just next door, and since we didn't live far away, he used to come and play in a large park near the cemetery when he was little. His whole life ultimately fits into this small perimeter.

My son loved life, he had so many projects... He had done theatre, played the guitar, composed music, imagined the plans for his future house, which he wanted to build himself... Ukrainian soldiers today are like the Cossacks who fought for Ukraine in the past: they are not afraid. Ukraine will win this war, but the trauma will be immense."