David Bisbal and Cosentino present a series of concerts in a philharmonic Key.

Philharmonic is a passion and enthusiasm for music. 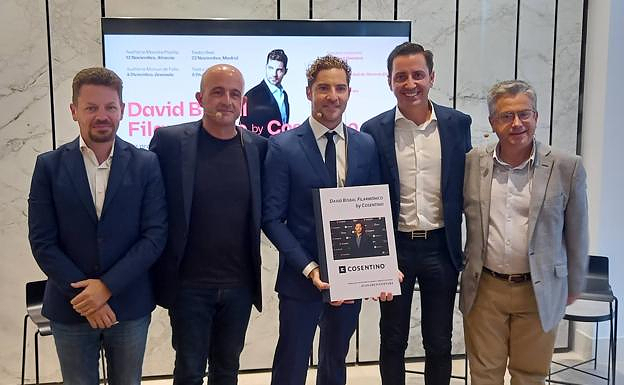 Philharmonic is a passion and enthusiasm for music. Cosentino, the world leader in the production and distribution innovative and sustainable surfaces for architecture, design and construction, joined forces with David Bisbal to create a unique and original project for each other. The firm promotes David Bisbal Filarmonico of Cosentino as a musical initiative in the key RE>>. This key is a reflection of very specific values that are linked to Almeria and shared by both David and Cosentino: effort, the ability overcome and reinvent, nonconformity, entrepreneurial spirit, and determination.

In this sense, the project, devised a few years ago by Francisco Martinez-Cosentino, President of the Cosentino Group, translates into a unique and singular philharmonic show, where the artist will address his most emblematic and well-known songs in a classical-symphonic-lyrical format. . David will be accompanied in a series of four concerts in Spain (Almeria Madrid, Granada, Malaga) by the City of Almeria Orchestra, conducted by Michael Thomas. The orchestra will include the conductor and orchestral arrangements of David, also from Almeria Juan Cruz Guevara.

This project is a new challenge for the artist. It will not only generate new musical discoveries but will also reveal a completely new David Bisbal, who will be a surprise to his fans and the public. David Bisbal Filarmonico of Cosentino is David's next step in his career, but without losing his essence.

David says, "I'm really excited about this project because it will allow me to fulfill one my most desired musical goals." These types of projects and formats are important to me. This cycle of concerts and the work done with Juan Cruz as well as OCAL will help me grow as a musician and singer, and allow me to explore new areas of my voice.

It is, for Cosentino, a new manifestation of its tangible and real commitment to culture, arts, and society. Almeria is another global reference for its innovative and ground-breaking commitment to music promotion.

"Our company defends and seeks to combine forces. In search of unique and inspiring synergies, we add talent. After many collaborations, and a long-lasting relationship with David, we knew that we needed to meet again. It was an exciting idea that was both ambitious and reflected the common values we share, which are typical of our country. Eduardo Cosentino stated that he is confident that the series of concerts will excite and surprise everyone and will continue to do so in the future.

Juan Cruz Guevara (Queen Sofia Award for Musical Composition) said that "we face a challenge from a musical, orchestral, and production point-of-view." It is exciting and exciting at the same, to change the appearance of a number of topics that are part of popular culture in Spain as well as internationally. It is an honor to work with David, a professional of his stature, and we will rediscover him in a unique manner under the philharmonic concert format>>.

About the Cosentino Group

Cosentino Group, a Spanish-owned family business, produces and distributes innovative, high-quality surfaces for architecture and design. It is a leader in its industry and creates innovative solutions for customers and partners that add value, design and inspiration to people's lives. It is possible because of the pioneering brands such as Silestone(r), Dekton (r) and Sensaby Cosentino(r), which are leaders in their respective segments. These innovative surfaces allow for the creation and maintenance of unique environments, designs and spaces in the home and public.

The group's development is based on international expansion, innovative research and development programs, respect for the environment, sustainability, and its corporate commitment to society.

From its headquarters in Almeria, Spain, the Cosentino Group distributes products and brands to more than 110 countries. The multinational is present in 40 countries and has subsidiaries or commercial assets in 30. The multinational owns 8 production plants (7 in Almeria, Spain and 1 in Brazil), and 1 Smart Logistics Center (Spanish) as well as more than 140 distribution and commercial facilities around the globe. International markets account for more than 90% of the turnover of Cosentino Group.

‹ ›
Keywords:
DavidBisbalCosentinoPresentanCicloConciertosExclusivosClaveFilarmonica
Your comment has been forwarded to the administrator for approval.×
Warning! Will constitute a criminal offense, illegal, threatening, offensive, insulting and swearing, derogatory, defamatory, vulgar, pornographic, indecent, personality rights, damaging or similar nature in the nature of all kinds of financial content, legal, criminal and administrative responsibility for the content of the sender member / members are belong.
Related News