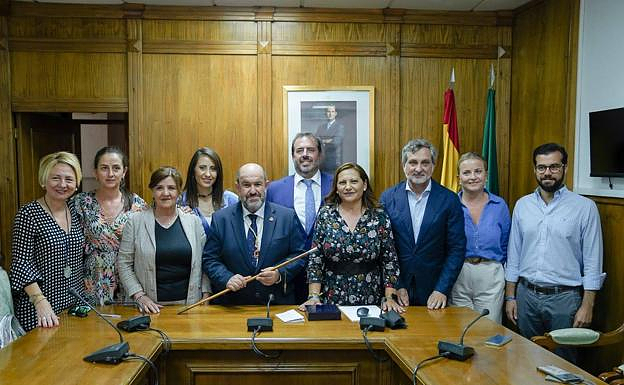 Today, the Dalias City Council hosted the plenary session. Francisco Lirola, the former socialist mayor, was elected mayor. This was thanks to the agreement with the Ciudadanos Group. Maria de Ambrox (Cs), will become the first deputy mayor. Maria Dolores Gomez and Ezequiel Gongora, along with Lirola, will serve as councilors for the Popular Party.

Before the many neighbors who wanted their presence at the plenary sessions in which Francisco Lirola received support from the PP provincial deputies Angel Escobar Maria Luisa Cruz and Carmen Belen Lopez, Alvaro Izuierdo was present. The recently elected mayor thanked everyone for their support in the last municipal elections of 785 Dalians, which saw the PP win the most votes. This confidence has allowed the Popular Party to assume "government responsibility" in a new stage where "humility" will be present in both the mayor and his government team.

Francisco Lirola, the mayor of the town has made his first speech. He reached out to all councilors to help him in this new stage. Although he called it "exciting", the new government team will need to face the difficult situation the municipality is in in the next few months.

He stated that he accepted the challenge of being mayor with confidence, respect, and the greatest humility. He was committed to finding the best municipal management solutions and responding to open fronts in municipal administration, acting conscientiously, listening carefully to residents of Dalias, Celin, and attending to their needs responsibly. The general interest of the municipality is the only guide to action.

Francisco Lirola stated that his priority is to "address Dalias' and Celin's immediate needs" through improving the City Council's public services. More resources will need to be allocated to this end and their development will be ordered. The new government team will not forget to develop projects in the future such as the rehabilitation of parks, the cemetery or the site for Luis Vives School.

Francisco Lirola, a Dalian resident, also reminded the crowd that the City Council will be facing two major events in the next few months. He has asked for the support of his neighbours. The Alpujarra Traditional Music Festival will be held next month. Second, the Festivities of Santo Cristo, San Miguel in Dalias, and Celin will take place in September.

Lastly, Dalias' mayor recalled the words of Alberto Nunez Feijoo (President of the PP) when he accepted new challenges. He said that "now I feel a little boy in me jumping for joy and believing that all the bad and good times, better and worse have been worth it to experience thisand has assured that he feels the same and that it has definitely been worth it>>.

‹ ›
Keywords:
GobiernoAyuntamientoAlcaldeDaliasAlmeriaPP
Your comment has been forwarded to the administrator for approval.×
Warning! Will constitute a criminal offense, illegal, threatening, offensive, insulting and swearing, derogatory, defamatory, vulgar, pornographic, indecent, personality rights, damaging or similar nature in the nature of all kinds of financial content, legal, criminal and administrative responsibility for the content of the sender member / members are belong.
Related News