"Before the final, I was very stressed, I really wanted the title, even if I already had one and my Championships were successful. 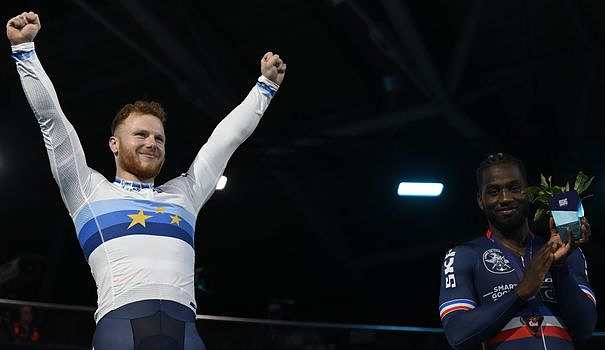 "Before the final, I was very stressed, I really wanted the title, even if I already had one and my Championships were successful. I felt the strongest and I wanted to make it happen", jubilant the French track rider .

Only the Dutch sprint masters Harrie Lavreysen and Jeffrey Hoogland, absent from the individual events, deprived him of a golden hat-trick in team speed where Sébastien Vigier had to settle for silver with his partners.

"Confidence is important", savors its national coach Grégory Beaugé, appointed in February. "Seb Vigier and Mathilde Gros (silver medalist in speed, Monday) have more qualities than the norm, but these last few years have not been easy for them."

A new title is therefore timely without the Essonnian having prepared for this Championship: "Last week, I hardly rode a bike but a lot of muscle", assured the 25-year-old sprinter.

Like him, the rest of the France team is focused on its home Worlds in Saint-Quentin-en-Yvelines (October 12-16). Two months before the deadline, the barometer is at its highest for a long time. The medals of Melvin Landerneau, in bronze in the keirin, of Clara Copponi and Marion Borras, in silver in the American, like Donavan Grondin and Thomas Boudat in the men's, bring the Bavarian spoils of the Blues to fifteen.

A record for the French team in these European Championships, certainly of recent creation (2010) and much less generous in events until 2013 -11 events against 22 in 2022.

As on the five days of the final, the podiums fell at a pace that was difficult for management to follow.

"There is a big dynamic", appreciated the director of the Olympic program Florian Rousseau. "I'm a little lost in the accounts. There is a significant number of medals with eleven of them in Olympic events, to check."

The account was good, a quarter of an hour. Until the Grondin-Boudat pair collect one more in silver in the American.

"We did one or two American sessions together a week before the Championship, on a course in Bourges, and we did a session here once. That's all we did, so it's pretty good" , displayed "Dino" Grondin, satisfied after his title the day before in omnium.

Quite the opposite of Clara Copponi, who after missing the gold for three points (171 against 174) on Monday, missed it for only one in the American on Tuesday (40 against 41).

"For the moment, disappointment prevails," raged the 23-year-old Aixoise, her eyes shining with frustration.

"I did not feel good, I did with the means at hand, recognized his partner Marion Borras. Fortunately, Clara ensured from start to finish."

If the velodrome closes its doors, the road sprinter has one last chance on Sunday in the road race to finally snatch this fleeing gold.