Customs, equipment, cyber ... How the executive wants to fight against cigarette trafficking

In charge of customs, the Minister of Public Accounts Gabriel Attal unveiled the content of the government's plan on cigarette trafficking, on the eve of his trip on this subject to the Spanish border, one of the favorite routes for contraband tobacco bound for France. 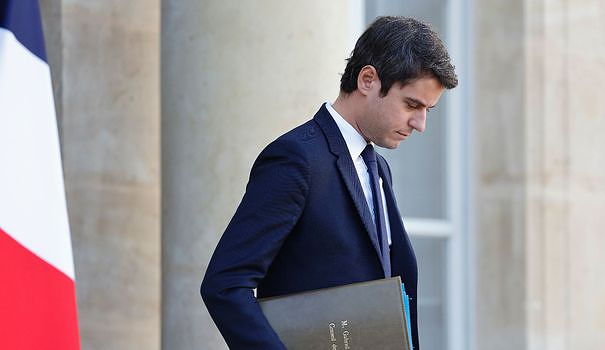 In charge of customs, the Minister of Public Accounts Gabriel Attal unveiled the content of the government's plan on cigarette trafficking, on the eve of his trip on this subject to the Spanish border, one of the favorite routes for contraband tobacco bound for France. In an interview with the Sunday newspaper, the minister said he wanted to "strike hard" to respond to the increase in cigarette trafficking. Between 2020 and 2022, 1,046 tonnes of tobacco were seized, which represents around fifty daily cases recorded in France. "In 2016, around 14,000 tobacco-related cases were processed over a year by customs, today we are at nearly 20,000", warns Gabriel Attal.

According to the French Observatory of Drugs and Addictive Trends, in 2018, a fifth of consumers (22%) had obtained cigarettes other than through tobacconists. One of the reasons for the success of this underground trade remains economic. The rise in the price of a pack of cigarettes - more than 10 euros - leads some less well-off smokers to turn to counterfeiting - where the price fluctuates between 3.5 to 5 euros per pack. According to government data, tax losses for the state would be between “2.5 and 3 billion euros”. A real shortfall. The authorities' plan "aims to adapt the customs response to the unprecedented scale taken by the parallel tobacco market", explains Gabriel Attal in a document obtained on Saturday by AFP.

The government's roadmap is to target the traffickers and dismantle the networks. "It is based on three pillars: monitoring, seizing, punishing", insists Gabriel Attal. In his viewfinder, the clandestine counterfeit tobacco factories present in France - three have been dismantled this year. Two of them were located in Poincy, in Seine-et-Marne. To better identify them, the executive wishes to systematize the analysis of tobacco by a scientific customs service. Objective: to better identify them chemically and thus trace illegal networks. The cap is set at ten networks to be dismantled each year.

The executive will release “45 million euros to triple the number of mobile scanners by 2025”. The authorities' plan provides for the deployment of a dozen vans equipped with X-ray scanners capable of sifting through a vehicle in sixty seconds. Also, the government intends to tighten the screw on the web by setting up a real generalized cyber customs network, ie a team of agents who will monitor the sale of tobacco on social networks.

These new measures also require more hands. To fight against fraud, Gabriel Attal plans to create 300 jobs by 2025. An announcement that made David-Olivier Caron, secretary general of the CFDT Customs, react at the microphone of Franceinfo this Sunday. "That is to say that when we create jobs, when we target jobs on a mission, we often withdraw or destroy another mission. We know very well that, strictly speaking, these are other missions who will pay for this effort in the fight against tobacco, when all the missions are important".

In addition to the role of surveillance, the goods must be seized. Gabriel Attal advocates better coordination between the police and the gendarmerie. "The multiplication of customs raids and harassment of sellers will be one of their priorities, in particular to fight against the sale on the sly", underlines the minister. Here again, he reveals his ambitious attack plan, with supporting figures: “the objective is 50 punch operations next year, and to reach 100 for the third year of the plan, in 2025.

Gabriel Attal finally indicates the opening of a reflection, with his colleague Keeper of the Seals Éric Dupond-Moretti, with a view to "strengthening the criminal sanctions" against buyers, sellers and manufacturers of contraband tobacco. "The illegal sale of cigarettes is a fairly profitable criminal activity, because the criminal risks to which traffickers are exposed are relatively low compared to those incurred for the sale of narcotics", sociologist David Weinberger, a specialist in illicit drug supply and researcher associated with Iris. Tobacco smuggling "is beginning to take on the aspects of drug trafficking", Florian Colas, head of the customs intelligence department (DNRED), told AFP. "Criminal organizations are using any means to move the product," he added, citing "road, express and postal freight, social media orders, heavily laden container flows, ' mules' tobacco that saturate thefts and clandestine factories".

The government therefore wishes to tighten the screw. "The penalty for importing or smuggling tobacco will increase from three to five years' imprisonment, and ten years in the case of an organized gang", indicates the minister. Regarding the illegal sale of tobacco at retail, it is to go from one to three years in prison, and from five to ten years in the case of an organized gang. In addition, the government also intends to target people selling cigarettes on the street, most of whom are undocumented. Thus, Gabriel Attal wishes to add an additional penalty of prohibition of French territory concerning tobacco trafficking. "This debate will take place in the immigration bill carried by my colleague Gérald Darmanin", he specifies. Finally, night grocery stores and restaurants that sell tobacco illegally are not forgotten. “I would like us to impose more penalties on night groceries and restaurants that sell tobacco illegally,” adds Gabriel Attal. The executive has set itself the goal of increasing the share of court cases by 25% by 2025.