Covid-19: will France have to destroy its 30 million doses of vaccines?

Will we soon have to resolve, like Switzerland, to destroy millions of doses of vaccines dormant in our warehouses? Last week the Confederation announced that it had to throw away 10. 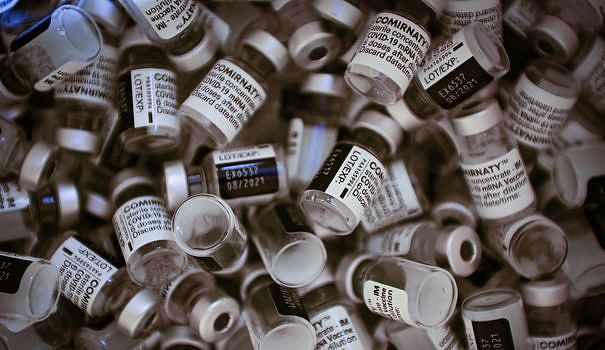 Will we soon have to resolve, like Switzerland, to destroy millions of doses of vaccines dormant in our warehouses? Last week the Confederation announced that it had to throw away 10.3 million doses of the Moderna vaccine against Covid-19, due to their expiry date. France is not immune to such a mess either. According to figures communicated by the General Directorate of Health to L'Express, France had in stock on September 27, 1.85 million bottles of Moderna and 1.7 million bottles of Pfizer, i.e. a little over 30 million doses of vaccines that can be injected. And while the country continues to see an increase in new Covid-19 cases, these stocks remain largely underutilized. The booster vaccination campaign is not expanding, and remains on average below 20,000 daily injections. Nothing to mop up the excess.

Especially since if a new booster vaccination campaign begins well at the beginning of October for the most fragile people, it should not be done with these so-called first generation vaccines. "By the end of October, several million doses of vaccines adapted (to variants, editor's note) will be delivered in national stock by the laboratories", assures the General Directorate of Health (DGS). According to the recommendations of the High Authority for Health (HAS), these new vaccines will be used as a priority for the most vulnerable populations. The “monovalent” vaccine doses, targeting the “Wuhan” strain of SARS-CoV 2, the first in circulation, will soon be reserved for primary vaccination. What definitively fix the future of bulky bottles?

Probably not, because all these doses should not be useless. "In the short term, the classic vaccines will remain injected until the arrival of the new bivalent vaccines. In addition, these bivalent vaccines have only received marketing authorization within the framework of the vaccine booster. The stock of vaccines classics will therefore make it possible to maintain access to primary vaccination", assures the General Directorate of Health. In fact, booster doses for a fourth injection, even if they are not yet recommended for the entire population (in particular for reasons of acceptability), can be administered to people under 50 who request them. "It is not prohibited and it is the difference between what comes under the marketing authorization and what comes under the recommendations made by the High Health Authority", confirms Jean-Daniel Lelièvre, immunologist and expert within the HAS. The High Health Authority also warns that in the event of the unavailability of "bivalent" vaccines, it is better for fragile people not to wait for them and to be vaccinated with the vaccines available.

To lock the stock it would be necessary above all that the French massively want a fourth injection. For the moment, the Trade Union Chamber of Pharmaceutical Distribution estimates weekly deliveries to pharmacies at 150,000 doses of first generation vaccines. Even if this level increased, it would be insufficient to complete the 30 million injections pending.

It is therefore especially beyond France that these doses could find their usefulness. Millions of people around the world have not yet received any vaccine against Covid-19. “It may be interesting, as the government has already done on several occasions, on large volumes, to send vaccine donations to certain countries”, confirms David Lepoittevin, director of vaccine activity at Pfizer France. But for that too it will not be necessary to delay, because these doses should have a very short lifespan. Currently Pfizer's RNA vaccines reach their expiry date after twelve months after leaving the factory, but according to the firm, trials would make it possible to determine until when it is possible to exceed these limits. “We have set up a lot of stability tests to be able to extend this expiry date, things are in progress”, promises the director of Pfizer France.

The subject is sensitive, and the General Directorate of Health refuses for the moment to communicate on this possibility. It also testifies to a very unequal system, where the overflow is the consequence of a purchasing policy aimed at securing supply for rich countries to the detriment of the poorest countries. “As we are in a logic of competition and commodification, the rule for the purchase of vaccines has above all been that whoever pays the most will have the most, but behind this arises the question of the ability to use these stocks as needed. must", criticizes Jérôme Martin, co-founder of the Observatory of the Transparency of the policies of the drug.

The images of the doses sent to the countries of the South, sometimes forced to be destroyed because they have expired, have reinforced this feeling of strong inequality in access to the vaccine. In December, "more than one hundred million doses were refused", mentioned earlier in the year the director of the supply division of UNICEF, Etleva Kadilli. From now on, the doses intended for the COVAX program must therefore be valid for ten weeks upon their arrival in the recipient country. One more constraint for these doses which will not find an arm this winter.