Coup d'etat in Burkina: return to calm in the streets of Ouagadougou

Lieutenant-Colonel Paul-Henri Sandaogo Damiba, who himself came to power in January by a putsch, was removed from office by soldiers and replaced at the head of the junta by Ibrahim Traoré, a young 34-year-old captain. 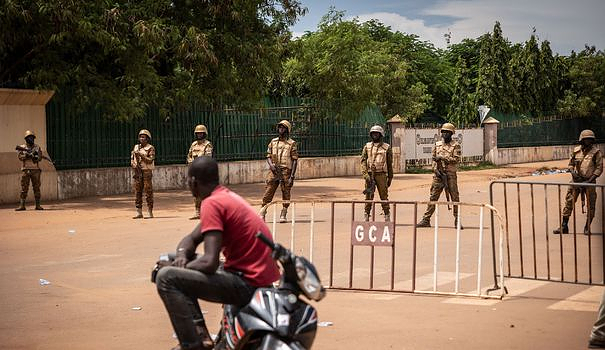 Lieutenant-Colonel Paul-Henri Sandaogo Damiba, who himself came to power in January by a putsch, was removed from office by soldiers and replaced at the head of the junta by Ibrahim Traoré, a young 34-year-old captain.

However, an important security device still surrounded the national television with several pickups and armored vehicles and many soldiers on foot or on motorcycles.

Shops and service stations were also gradually reopening, as were some shops in the large Ouagadougou market.

And in the streets, several inhabitants welcomed this new putsch in a rather positive way.

"Damiba has failed. Since he came to power, areas that were at peace have been besieged. He took power, then he betrayed us," said Habibata Rouamba, a trader and civil society activist.

"On the security level, nothing is going well, there are no results. Since Damiba took power, it has only gotten worse", abounds Honoré Yonli, a manager of an organization of young entrepreneurs.

Friday evening, after a day peppered with shooting in the district of the presidency in Ouagadougou, about fifteen soldiers in fatigues and for some hooded spoke, shortly before 8:00 p.m. (GMT and local) on the set of national radio and television.

They removed from office Colonel Damiba - whose fate remained unknown on Saturday morning - and announced the closure of land and air borders as well as the suspension of the Constitution and the dissolution of the government and the Transitional Legislative Assembly. A curfew has also been put in place from 9 p.m. to 5 a.m.

The soldiers invoke "the continuous deterioration of the security situation" in the country.

The new head of the junta, Captain Traoré, was until now the corps commander of the Kaya artillery regiment, in the north of the country, particularly affected by jihadist attacks.

"These are the same young officers who were already on the maneuvers during the first coup in January. It's an intramural coup. Damiba was let go by his base who felt betrayed. Things will have to be refocused on the anti-jihadist fight", decrypts the political analyst Drissa Traoré.

- Adherence to the schedule? -

For the time being, the new putschists have not indicated whether they intend to respect the transition timetable on which Burkina and the Economic Community of West African States (ECOWAS) had agreed. A civilian return to power was scheduled for July 2024.

Friday evening, ECOWAS, from which Burkina has been suspended since the January putsch, "condemned in the strongest terms the seizure of power by force which has just taken place".

The presence of Russian flags in a demonstration of several hundred people Friday afternoon to demand the departure of Mr. Damiba, also raised questions about the influence of Moscow in this new putsch.

"It is obvious that the Russian supporters are more and more numerous. Within the army and the populations, voices are being raised to ask for a partnership with Russia. But this remains at the stage of theory. We must not expect a break with France but perhaps more cooperation with other partners such as Russia”, tempers analyst Drissa Traoré.

Colonel Damiba came to power in January in a coup that overthrew President Roch Marc Christian Kaboré, discredited by the increase in violence.

But in recent months, attacks hitting dozens of civilians and soldiers have multiplied in the north and east, where cities are now under blockade by jihadists, who blow up bridges with dynamite and attack convoys supplies circulating in the area.

Since 2015, recurrent attacks by armed movements affiliated with the jihadists of Al-Qaeda and the Islamic State group, mainly in the north and east of the country, have killed thousands and caused the displacement of some two million people. .