Costas approves the new coast demarcation of Roquetas to Aguadulce, which leaves out 25 ha by court order

The Ministry for the Ecological Transition (Miteco), has approved the demarcation along the coast between the northern end Antonio Machado Street, El Puerto de Roquetas de Mar and the area of the ruins the old barracks for carabineros near the beach of Los Bajo. 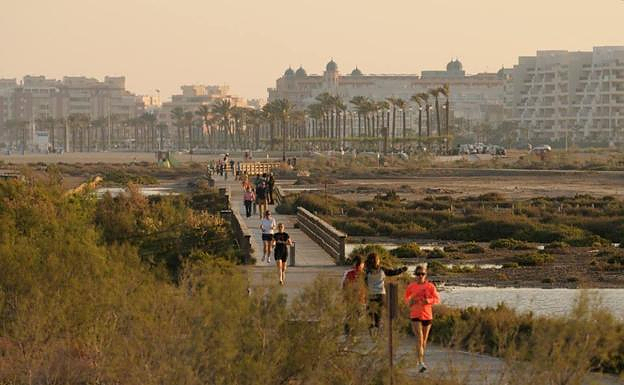 The Ministry for the Ecological Transition (Miteco), has approved the demarcation along the coast between the northern end Antonio Machado Street, El Puerto de Roquetas de Mar and the area of the ruins the old barracks for carabineros near the beach of Los Bajo. This is where the original delimitation of the maritime-terrestrial domain was made. Court order also allowed for the removal of two farms which total approximately 25 hectares in the Ribera de la Algaida.

According to the ministerial order, the Miteco accepts but doesn't share the sentence of Court of First Instance 5 of Almeria of execution of Judiciary titles to comply with a sentence of Provincial Court that declares private property of both farms in favour of a company whose corporate purpose it is the production, marketing, and aging of wine, and the management and administration of real-estate.

According to Cadastre data, the largest farm covers 19.7 ha of rural agricultural land. It extends longitudinally for more than 600m to the beach. Further inland, the second estate covers 5.3 hectares urban land.

Tragsatec, a public company, prepared the study to which the Miteco refers. It served to delimit public domain before it was modified by the final judicial resolution in 2021 in two subsections.

According to the report, despite recent "anthropic" changes in the area, both the "restinga" (or beach sandbank) and "interior areas" that are affected by waves and adjacent areas "have been and continue to be, but to a lesser degree, land subject to marine influences>>.

The field study identified 53 species of vegetation. 33 were "associated" to "coastal, salty lands" and "abundant moisture in the soil" throughout the study area. It also highlighted El Bosque's uniqueness, which was subject to minor alteration due to man and halophile-type communities.

The report also stated that "on the rubble, land dumping", "scattered plant fragments and communities that could be assigned the artales series" had been found.

The Miteco resolution rejected the claims of Ecologistas En Accion and Grupo Ecologista Mediterraneo, who requested that it accept the 2016 ruling but maintain the planned demarcation.

They claimed to be able to support their claim that the sentence above that declared the private property of these land "cannot modify or alter the inalienable character of the maritime-terrestrial common domain."

It is rejected by the ministry. The Supreme Court (TS), in 2020, declared the sentence final.

The file also rejected the claims of conservationist groups who requested inclusion of the Salinas de San Rafael into the maritime-terrestrial domain. It emphasized that the file has shown that they were built at a higher level than sea level and had no direct connection to this.

The resolution authorizing the demarcation determines the width of the protection easement zones along the six kilometers of coastline it affects. According to the PGOU de Roquetas de Mar, a variable area of 20 to 50 meters is established in a small section. This "intention not to give rise compensation for a decline in urban development".

The Miteco however, places it at 100m in the majority of this demarcated rock coast. This is either because it is "as nondevelopable land, of special protected due to the existence the old salt pans" or because it's "as developable but without evidence of any approved plan".

The Miteco also orders the Provincial Coastal Service of Almeria to take legal actions to correct legal registration issues that are inconsistent with the approved demarcation of 5.9 kilometres.

It also grants one year for the owners of land included in public domain to request the same concession if they can show their inclusion in any of these cases.

‹ ›
Keywords:
CostasApruebaNuevoDeslindeLitoralRoquetasAguadulceDejaHectareasOrdenJudicial
Your comment has been forwarded to the administrator for approval.×
Warning! Will constitute a criminal offense, illegal, threatening, offensive, insulting and swearing, derogatory, defamatory, vulgar, pornographic, indecent, personality rights, damaging or similar nature in the nature of all kinds of financial content, legal, criminal and administrative responsibility for the content of the sender member / members are belong.
Related News