Eight people, including Charles Pieri, 72, a nationalist figure suspected of having once led the FLNC, were arrested early in the morning, according to judicial sources close to the investigation. 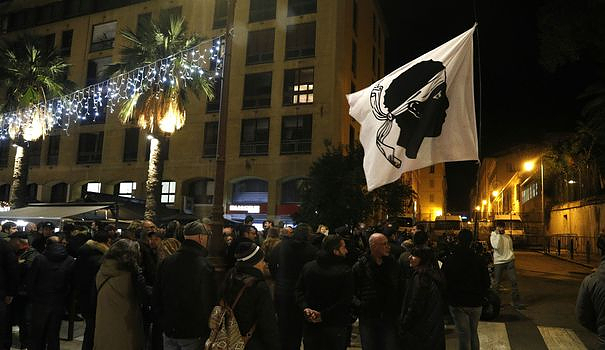 Eight people, including Charles Pieri, 72, a nationalist figure suspected of having once led the FLNC, were arrested early in the morning, according to judicial sources close to the investigation.

Sulidarita, an association for the defense of so-called "political" prisoners, told AFP that the son and grandson of Charles Pieri were also among those arrested.

"The French state apparatus continues its repressive policy against Corsica Libera. This (Monday) morning, numerous arrests targeting activists and leaders of our party are in progress. We demand their immediate release", denounced on Twitter the independence party.

"Let the French State make no mistake about it, the return of blind repression will never divert us from our fight", added the party of Jean-Guy Talamoni, former president of the Assembly of Corsica, in calling for mobilization "in the hours to come".

Former flagship party of the independence movement, Corsica Libera has only one elected since the territorial elections of 2021, against 13 previously.

Thursday, three men, including Pierre Paoli, another activist of Corsica Libera, also suspected of having been at the head of the FLNC, had already been arrested in Corsica, in this same investigation.

Two of them, including Pierre Paoli, were released on Sunday after three days in police custody. The third should be presented in the coming days to an investigating judge from the anti-terrorist pole of the Paris court.

These two series of arrests were carried out as part of a judicial investigation opened by the National Anti-Terrorist Prosecutor's Office (Pnat), in particular for terrorist criminal association, according to judicial sources close to the investigation.

This procedure relates in particular to a clandestine press conference of the FLNC.

In a press release, sent on September 2, 2021 to Corse-Matin, this movement had threatened a return to armed struggle on the island if the French state continued "its policy of contempt". On a video accompanying this text, about fifty hooded men, dressed in black and heavily armed, surrounded an activist who read the text signed by the FLNC-Union des combatants (FLNC-UC) and the FLNC on October 22.

Corsica has known for a year a multiplication of arson attacks mainly targeting second homes of French people residing in France, but without official claim.

In this tense context, the Ministry of the Interior indicated on Sunday that the Minister of the Interior, Gérald Darmanin, was postponing his planned trip to Corsica on Thursday and Friday until January, estimating, in agreement with local elected officials, that the climate n was "not favorable": "It is better to leave some time for the tension to decrease".

Charles Pieri, a controversial figure of Corsican nationalism, ex-presumed leader of the FLNC-UC, has been convicted on several occasions, notably in 2001, with a five-year prison sentence for criminal association in connection with a terrorist enterprise.

In 2005, he was sentenced to 10 years for in particular "extortion" and "criminal association", sentence reduced to eight years on appeal.

In 2018, he was fined 15,000 euros for a message insulting the widow of the prefect Erignac, assassinated in 1998 in Ajaccio. This message had been posted on a Facebook account assigned to him.

In addition, according to a judicial source, two restaurants were set on fire in Corte (center of the island) on the night of Sunday to Monday, including one co-managed by a son of the president of the executive council of Corsica, Gilles Simeoni.

In addition, eight vehicles were set on fire in a car dealership belonging to Jean-André Miniconi, who had led a list supported by Gilles Simeoni in the 2020 municipal elections in Ajaccio.