COP27 adopts a text on climate damage to the poorest

The chairman of the conference, Egyptian Foreign Minister Sameh Choukri, “implored” the delegates from nearly 200 countries who have been meeting for two weeks in the seaside resort of Sharm el-Sheikh to adopt the resolutions which must be presented to them. 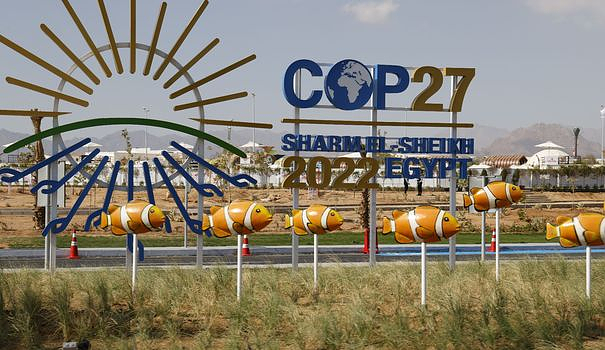 The chairman of the conference, Egyptian Foreign Minister Sameh Choukri, “implored” the delegates from nearly 200 countries who have been meeting for two weeks in the seaside resort of Sharm el-Sheikh to adopt the resolutions which must be presented to them.

Mr. Choukri assured that they reflected "delicate balances" and "the highest ambition that can be achieved at this time", an illustration of the difficulties encountered by this COP, under a much criticized Egyptian presidency.

He immediately submitted to the delegates, who decide by consensus, the most emblematic resolution of this edition, described as historic by its promoters, on compensation for the damage caused by climate change already suffered by the poorest countries.

But he then had to agree to a 30-minute suspension, requested by the Swiss delegation, which pointed out that delegates had only received another very important text, the final comprehensive declaration, "a few minutes" before the start of the meeting and therefore could not comment on it.

The dossier of climate "losses and damage" in poor countries had almost derailed the conference, before being the subject of a last-minute compromise text which leaves many questions unanswered, but acknowledges the principle of the creation of a specific financial fund.

The text on emission reductions was also hotly contested, with many countries denouncing what they considered to be a step back from the ambitions defined at previous conferences.

In particular on the most ambitious objective of the Paris agreement, to limit global warming to 1.5°C compared to the pre-industrial era.

Because the current commitments of the signatory countries of the agreement do not make it possible to meet this objective, nor even that of containing the rise in temperature to 2°C compared to the pre-industrial era, when humans began to mass use of fossil fuels responsible for global warming.

These commitments, assuming they are fully met, would at best put the world on a trajectory of 2.4°C by the end of the century and, at the current rate of emissions, on that of a catastrophic 2.8°C. .

However, at nearly 1.2°C of warming today, the dramatic impacts of climate change are already multiplying.

The year 2022 was an illustration of this, with its procession of droughts, mega-fires and devastating floods, impacting crops and infrastructure.

The costs of these extreme events are also soaring: the World Bank has estimated the cost of the floods at 30 billion dollars, which left a third of Pakistani territory under water for weeks and claimed millions of victims.

Poor countries, often among the most exposed but which are generally very little responsible for global warming, have been demanding for years funding for the "losses and damages" they suffer.

The battle will not end with the adoption of the Sharm el-Sheikh resolution since it remains deliberately vague on certain controversial points.

Operational details must be defined for adoption at the next COP, at the end of 2023 in the United Arab Emirates, promising new confrontations. Particularly on the issue of contributors, developed countries insisting that China be part of it.

Another subject that shook the COP: emissions reduction ambitions.

Many countries considered that the texts proposed by the Egyptian presidency constituted a step backwards on the commitments to regularly raise the level made in 2021 at the COP in Glasgow.

Not to mention the issue of reducing the use of fossil fuels, the cause of global warming but barely mentioned in most climate texts.

Coal had been mentioned in 2021 after tough exchanges but in Sharm el-Sheikh the "usual suspects", in the words of one delegate, once again opposed it for oil and gas. Saudi Arabia, Iran or Russia are the most frequently used country names.