With Westminster Abbey only able to accommodate around 2,000 people, only heads of state and one or two guests per country have been invited to Britain's first state funeral since 1965. 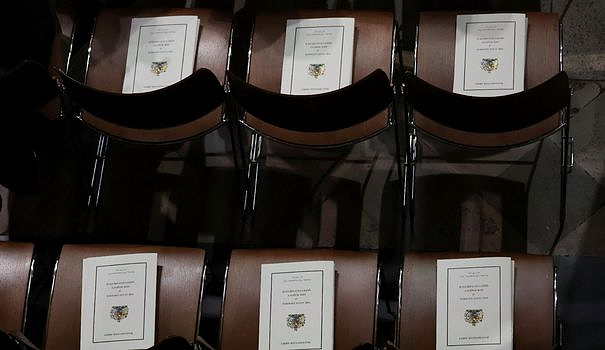 With Westminster Abbey only able to accommodate around 2,000 people, only heads of state and one or two guests per country have been invited to Britain's first state funeral since 1965.

Many crowned heads have confirmed their presence at the funeral of the sovereign, who reigned for more than 70 years.

Japan's Emperor Naruhito and Empress Masako will come on their first overseas trip since assuming the throne in 2019.

Prince Albert II of Monaco, his wife Charlene, King of the Netherlands Willem-Alexander, Queen Maxima and Princess Beatrix, King Philippe of the Belgians and King Harald V of Norway will all be present, as will Queen Margrethe of Denmark, now the sole reigning queen of Europe.

The King of Spain Felipe VI will be there, but also his father Juan Carlos I, who abdicated in 2014 and now lives in the United Arab Emirates.

Arriving in London on Saturday evening, US President Joe Biden and his wife Jill Biden gathered on Sunday afternoon in front of the sovereign's coffin.

Unlike other leaders who were asked to come to the Abbey on buses chartered by the authorities, Joe Biden was granted permission to use his armored presidential limousine, "The Beast".

"Can we have a little thought for the person in charge of the Élysée who had to announce to the president (French Emmanuel) Macron that in London, he should get on the bus?", quipped Sunday the daily The Times.

The French president, who will indeed be present, would have said "no" to the bus, but we do not know what arrangements have been made.

Another difficulty lies in the placement of the guests, underlines the Times: it is necessary "to avoid any risk that anyone will feel offended by being placed behind a pillar and to ensure that no one comes to fight".

Sometimes disputed personalities are expected. Brazilian President Jair Bolsonaro took advantage of his visit to deliver a virulent electoral speech on the balcony of the residence of the Brazilian embassy. An expected time, Turkish President Recep Tayyip Erdogan, in New York, was represented.

Saudi Arabia is expected to be represented by Prince Turki bin Mohammed Al Saud, according to a diplomatic source. Saudi Prince Mohammed bin Salman (MBS), whose possible visit made people cringe, was sidelined from the international scene after the assassination of journalist Jamal Khashoggi at the Saudi Arabian consulate in Turkey in 2018.

Chinese President Xi Jinping will be absent, but his Vice President Wang Qishan will attend the funeral. The latter was able to gather on Saturday afternoon in front of the coffin of the sovereign, although deputies tried to ban any Chinese delegation to Westminster.

At the origin of their anger: the sanctions imposed by China against British parliamentarians who had criticized its human rights record.

Russia and Belarus are among a small group of nations that will be barred from the queen's funeral after Moscow invaded Ukraine, a ban deemed "blasphemous" and "immoral" by Moscow.

On the other hand, if the Ukrainian president Volodymyr Zelensky will not be there either, his wife Olena Zelenska gathered Sunday in front of the coffin of Elizabeth II.

Burma, a former British colony ruled by a military junta sanctioned by London, but also Syria, Afghanistan and North Korea have also been excluded.