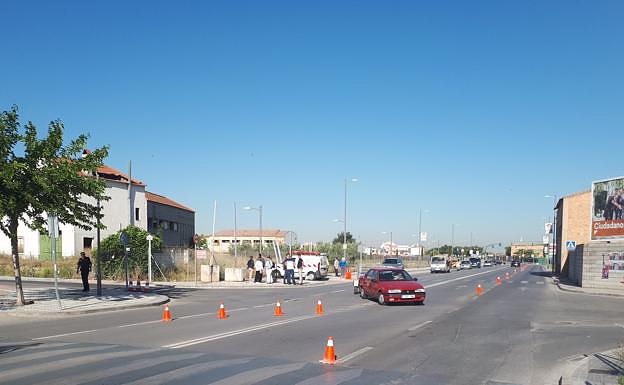 Construction work began on Wednesday on a roundabout at Cristobal Colon avenue, Churriana de la Vega, (Granada). This has led to the first traffic divertions previously agreed by the Ministry of Development, Infrastructure and Territorial Planning and City Hall. The works are being executed by the Public Works Agency of Junta de Andalucia and cost 88,000 euros.

Cristobal Colon Avenue is the northern bypass of Churriana. It focuses traffic from the Granada capital bypass through the towns of Cullar Vega, Las Gabias and Las Gabias. This will improve road safety and fluidity along the axis. Roundabouts will be composed of two lanes. The central island will measure eight meters in diameter and include a 2.55 meter wide Gort that will allow heavy vehicles to turn. The gazebo's outer diameter exceeds 27 metres.

Although the works will allow vehicles to pass, Cristobal Colon Avenue in Churriana will be reduced from a single carriageway to one lane in each direction.

The work involves the replacement of pipes for drinking water, electricity, lighting, drainage network of roundabout, paving with bituminous mix continues in the area and the implementation of pedestrian crossings. The lighting network will also be installed with eight lampposts and horizontal and vertical signage. In coordination with the City Council, the installations will then be connected and legalized.

Directly, Churriana de la Vega's 14,851 residents are the beneficiaries. Indirectly, there are 28,081 people that make up Las Gabias (20.703) and Cullar Vega (7.378 inhabitants). They usually travel by car to CristobalColon Avenue to reach Armilla or the Granada ringroad.

‹ ›
Keywords:
ComienzanObrasConstruccionGlorietaChurrianaVega
Your comment has been forwarded to the administrator for approval.×
Warning! Will constitute a criminal offense, illegal, threatening, offensive, insulting and swearing, derogatory, defamatory, vulgar, pornographic, indecent, personality rights, damaging or similar nature in the nature of all kinds of financial content, legal, criminal and administrative responsibility for the content of the sender member / members are belong.
Related News