Companies can benefit greatly from the skills of the military

The Ministry of Defense, Asempal and the Business Confederation of the Province of Almeria have signed a cooperation framework agreement to encourage activities that supplement training and promote the use of the abilities of military professionals. 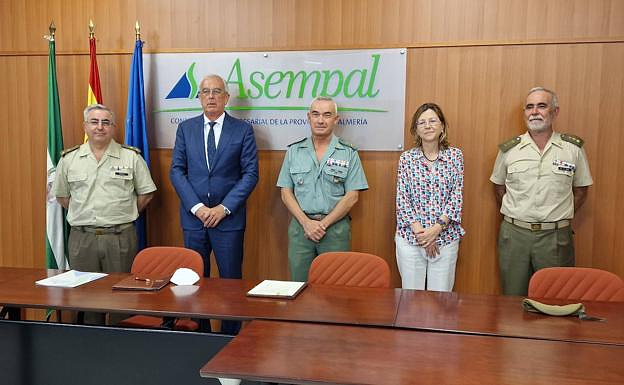 The Ministry of Defense, Asempal and the Business Confederation of the Province of Almeria have signed a cooperation framework agreement to encourage activities that supplement training and promote the use of the abilities of military professionals. This will facilitate their access to the civil labor market after they have completed their commitment to the Armed Forces.

This agreement outlines actions that will support the improvement in employability, particularly of the Military Troops and Sailors and the group Special Availability Reservists. It is designed to facilitate their transition to a changing labor market that requires different skills and knowledge through training and information initiatives.

Asempal's president praised the Armed Forces for their work and the value they can add to the business community through their training. Companies in Almeria can benefit greatly from the skills and attitudes of the military, particularly if they are able to recruit talent from a group that shows loyalty and is willing to sacrifice for the greater good of society.

Jose Cano expressed gratitude to the Armed Forces for their work in the most difficult situations and pledged his support.

The agreement will allow the Ministry of Defense to promote and facilitate the participation of all those who are interested in the various actions being implemented. It will also disseminate the offers of work, training, and other activities through the computer platform of the Ministry of Defense's System for the Use of Professional Skills of Military Personnel Sapromil. (www.sapromil.es)

Asempal, for its part, will distribute the information of the agreement among the members organizations and the companies in the province to enable them to identify training and employment opportunities. They will also provide information about their training activities.

The Professional Opportunities Area of the General Subdirectorate of Recruitment, Professional Development of Military Personnel, and Special Availability Reservists has received the Recruitment Area of Almeria. It has developed and promoted, in consideration of it being of interest, the agreement between the Business Confederation of the Province of Almeria and the Ministry of Defense ( ASEMPAL). This will be ratified and signed by Adoracion Mateos Tejada as Undersecretary of Defense.

The General Subdirectorate for Recruitment is responsible to develop, coordinate and manage the Sapromil platform. This includes continuing the training support for Enlisted Personnel, Sailors and Officers. It is an inexcusable luxury to throw away a team with years of experience and the subsequent investment this has meant for both the Ministry of Defense as well as the nation.

‹ ›
Keywords:
AptitudesMilitaresGranValorEmpresas
Your comment has been forwarded to the administrator for approval.×
Warning! Will constitute a criminal offense, illegal, threatening, offensive, insulting and swearing, derogatory, defamatory, vulgar, pornographic, indecent, personality rights, damaging or similar nature in the nature of all kinds of financial content, legal, criminal and administrative responsibility for the content of the sender member / members are belong.
Related News