Pierre Alessandri had obtained on May 12 a probationary semi-freedom measure for conditional release, but the National Anti-Terrorist Prosecutor's Office (Pnat) had appealed. 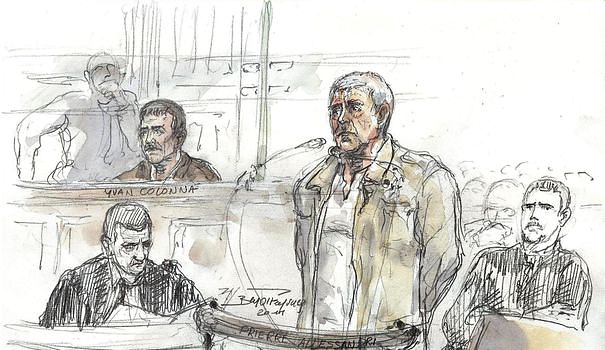 Pierre Alessandri had obtained on May 12 a probationary semi-freedom measure for conditional release, but the National Anti-Terrorist Prosecutor's Office (Pnat) had appealed.

"Following the requisitions of the Attorney General of Paris, the Sentence Enforcement Division of the Paris Court of Appeal has today overturned the decision rendered at first instance and rejected the request for sentence adjustment made by Pierre Alessandri,” Attorney General Remy Heitz said in a statement.

This was the third request for sentence adjustment in semi-freedom filed by Pierre Alessandri, now 64 years old and releasable since 2017.

Each time, in October 2019, in July 2021, then in May 2022, the court for the application of anti-terrorism sentences had given the green light, but the decision had been reversed by the court of appeal after a suspensive appeal by the Pnat.

On learning of the decision at the beginning of the afternoon, the autonomist president of the executive council of Corsica, Gilles Simeoni, had called on the presidents of the various political groups of the assembly of Corsica to meet to reflect "together on what must be done so that the path of war towards which some in Paris want to lead us is not the one we are taking. Neither us, nor our youth".

A reference to the riots in the spring on the island which followed the fatal attack in prison of the independence activist Yvan Colonna, also convicted for the assassination of the prefect Erignac.

After two hours of meeting of the presidents of political groups, the president of the assembly of Corsica, Marie-Antoinette Maupertuis read a joint declaration, denouncing "this decision of justice" as being "misunderstood and unjust".

It is "incomprehensible", the argument of the judges being the risk of a disturbance to public order in the event of the release of Pierre Alessandri while the Corsican elected officials "consider that it is on the contrary today the continued detention of Pierre Alessandri like that of Alain Ferrandi which could be generators of such a disorder".

Judging that "the judgment delivered today contravenes the logic of appeasement which conditions the smooth running and the success of the process of negotiations undertaken between Corsica and the State", Mrs Maupertuis, on behalf of the Assembly of Corsica, called on the "government to quickly recreate political conditions for calm dialogue and mutual trust".

Interior Minister Gerald Darmanin, who in July initiated a cycle of meetings with Corsican elected officials on the future of the island, including institutional ones, is expected on the island next Thursday and Friday.

"As a sign of solemn indignation", Ms. Maupertuis also announced that the session of the assembly, scheduled for Thursday and Friday, was interrupted.

Earlier, Pierre Benedetti, the leader of the independence party Core in Fronte, which has six elected out of 63, announced that "Core in Fronte suspends (has) its participation in the negotiations in Paris".

Josepha Giacometti, the sole representative of the independence party Corsica Libera in the assembly of Corsica, had called for "entering into a logic of balance of power", considering that "when the law becomes a weapon of revenge and a legal artifice, the people must know how to stand up and demand justice".

Even the right-wing opposition (17 seats out of 63) to the nationalists had expressed "a feeling of injustice" in the face of the court decision.

Pierre Alessandri appealed in cassation against the second refusal of justice to grant him this adjustment of sentence. The Court of Cassation is due to render its decision on October 26.

With Alain Ferrandi, who had also been asking for years to bring them together in Corsica, Pierre Alessandri was transferred on April 11 to Borgo prison, a transfer made possible by the lifting of their status as "particularly reported detainees".