Colombia: three dead and twenty trapped in a landslide

“Nine people were rescued, three died and it is estimated that more than 20 people are still missing. 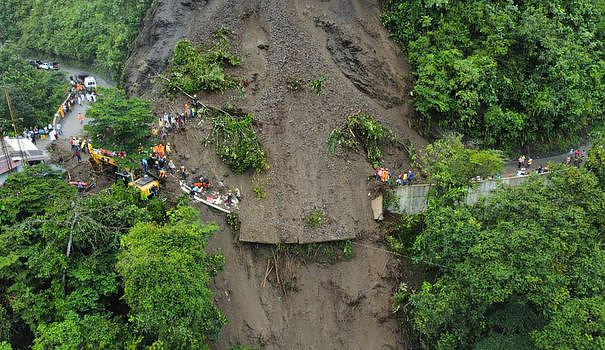 “Nine people were rescued, three died and it is estimated that more than 20 people are still missing. It is a tragedy,” President Gustavo Petro wrote on Twitter.

The landslide occurred in an isolated and mountainous area of ​​the municipality of Pueblo Rico, according to Civil Defense.

Dozens of crossing guards are looking for the passengers of a motorbike and a public service bus, stuck in the landslide.

Rescuers deployed mourned "the death of a minor who, after being rescued, was taken to Pueblo Rico hospital (and) died before arriving", said Alexander Méndez, spokesman for the organization, to the television news Noticias Caracol.

The vehicle left the city of Cali (southwest) in the early hours of the morning and traveled some 270 kilometers before crashing through the western Andes mountain range towards Quibdó (northwest), according to Civil Defense .

According to the testimony of a survivor, the driver of the bus saw the collapse of the hill towards which he was heading.

"A part collapsed and the bus was a little further back. The bus driver was reversing when everything collapsed," Lloró Stéreo Andrés Ibargüen, who was evacuated from the city, told radio station. area in an ambulance.

Since the beginning of August, the country has been in a state of "national disaster" due to the worst rainy season in 40 years, according to the government.