Colombia: Petro takes the reins of the army, wants it to work for "peace"

During a ceremony with review of the troops in a military school in Bogota, the new heads of the armies, the army, the air and the navy were sworn in before the first left-wing president of the history of the country, elected last June. 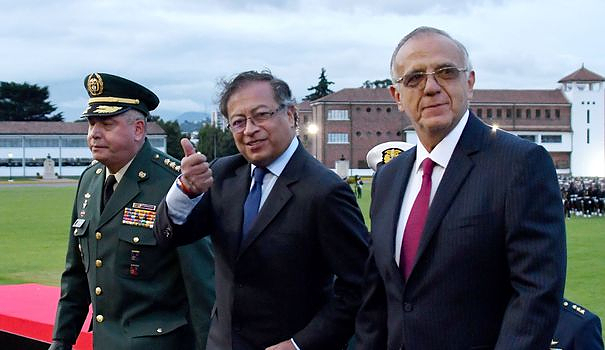 During a ceremony with review of the troops in a military school in Bogota, the new heads of the armies, the army, the air and the navy were sworn in before the first left-wing president of the history of the country, elected last June.

"I invite you to reflect on the meaning of the election (...): the population voted for a change", launched Mr. Petro in front of an audience of officers, accompanied by his recently appointed Minister of Defense , Ivan Velázquez Gomez.

After "decades of massacres" to "kill each other in a fratricidal war, permanent violence, (...) change means getting out of this perpetual war and building peace (...), it is an order of the people".

"What does this mean for the army? (...) It is not a question of replacing one general with another (...). The army must not only prepare for war, but it must also prepare for peace, finish as an army of peace", underlined the 62-year-old president, a former member of a far-left urban guerrilla in the 1980s and whom the Colombian army had then harshly fought.

On August 12, the new head of state replaced the entire military command, including the police, emphasizing that his mission would henceforth be "the reduction of violence, crime, and a substantial increase in respect for human rights and public freedoms".

In particular, he appointed General Helder Fernan Giraldo as Commander-in-Chief, and installed General Henry Armando Sanabria as head of the police, under the authority of the Ministry of Defense, and of which Mr. Petro has already promised a "profound transformation " with its passage under a new ministry of supervision.

With these appointments, the new power of the left precipitated the departure of around thirty generals from the army and the police, an unprecedented event and an earthquake at the head of this institution.

After six decades of conflict against the FARC guerrillas (disarmed with the 2016 peace agreement), still fighting against the multiple armed groups operating in the country's provinces (and in particular the FARC dissidents and the Guevarist guerrillas of ELN), the army continues to enjoy broad popular support.

But scandals have tarnished his reputation: alliances with bloodthirsty paramilitaries, cases of complicity with the Clan del Golfo (the largest drug gang in the country) or the execution of more than 6,000 civilians falsely presented as guerrillas killed in action between 2002 and 2008.

On Friday, during another ceremony with the police command, the president issued a stern warning to the police, implicated for their bloody repression of popular demonstrations in 2021 and their poor results in the fight against drugs.

The army too is primarily intended to "defend the citizens", he repeated on Saturday. It will have to fight against "drug trafficking, foreign cartels whose growing power threatens our sovereignty". It will also have to protect the environment, and "the Amazon forest" in particular.

These upheavals at the head of the great mute come as Mr. Petro intends to relaunch peace negotiations with the ELN, discuss with drug traffickers so that they submit to justice, and resume normal relations with neighboring Venezuela, while the two countries had been at loggerheads for years.

"We will go down in history if we build peace. We are at this moment in history, we can assume it, or not...", warned the new president in front of the generals.