Coffee, cocoa, meat... These products resulting from deforestation are now banned by the EU

No traceability, therefore no cocoa, or even coffee. 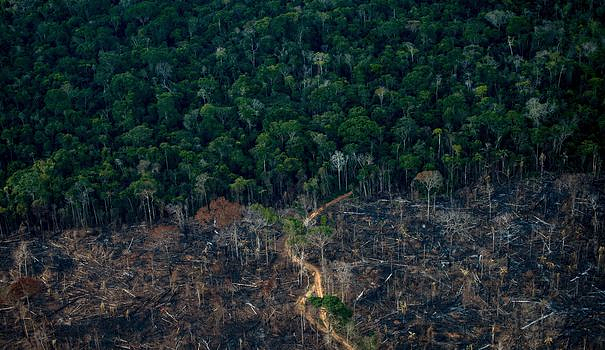 No traceability, therefore no cocoa, or even coffee... After long negotiations, the European Parliament and the EU Member States reached an agreement overnight from Monday to Tuesday to ban imports into the European Union of several products when they contribute to deforestation. Objective: to prevent French citizens, and more broadly European citizens, from contributing to the destruction of tropical forests a thousand leagues from their homes by drinking coffee.

The text thus provides for the exclusion from the European market of beef, wood, palm oil, soya, coffee or even cocoa linked to deforestation, whether or not it is legal in the country of production. Rubber, as well as several associated materials (leather, furniture, printed paper, charcoal, etc.) are also concerned, said Parliament in a press release. Their import will be prohibited if these products come from land deforested after December 2020, taking into account the damage inflicted not only on primary forests, but on all forests.

And for good reason: according to the United Nations Food and Agriculture Agency (FAO), nearly 420 million hectares of forest, an area larger than the EU, were deforested between 1990 and 2020. And Europeans contribute significantly to this phenomenon. In 2017, the World Wide Fund for Nature (WWF) estimated that EU imports were responsible for 16% of global trade-related deforestation, making it the second biggest destroyer of rainforests behind China (24%) and ahead of India (9%) and the United States (7%).

How will the text materialize? Importing companies will be responsible for their supply chain and will have to prove their traceability via crop geolocation data, which can be associated with satellite photos. The text also provides for the implementation of more or less frequent checks. At least 9% of the volumes imported from countries where the risk of deforestation is high will have to be controlled (only 1% for those where the risk is lowest). The fines, calculated according to the environmental damage, could reach up to 4% of the total annual turnover in the European Union.

"It's a first in the world! It's the coffee for breakfast, the chocolate we eat, the charcoal in our barbecues, the paper in our books. It's radical", said congratulated Pascal Canfin (Renew, liberals), chairman of the Environment Committee in the European Parliament. The text was proposed in November 2021 by the European Commission, after a public consultation launched in 2020 by the Commission to request an ambitious law against deforestation, brought together 1.2 million people. It was the second most popular consultation in the history of the European Union (EU).

The European Parliament had also called for the scope of the text to be extended to other threatened wooded ecosystems, such as the Cerrado savannah (Brazil, Paraguay, Bolivia), from which part of European soybean imports come. But the agreement found between negotiators from Parliament and the States finally stipulates that this extension "to other wooded land" must be assessed at the latest, one year after the entry into force of the text.

Similarly, after two years, the Commission is required to study a possible extension of the scope to other products (such as maize, which MEPs wanted to target immediately), to other ecosystems rich in storage carbon emissions and biodiversity (peat bogs, etc.), but also to the financial sector. Eventually, the EU could thus consider obliging financial institutions to refuse financial services or credits if these risk being associated with deforestation activities.

On the other hand, "we have already obtained a much more robust definition of what is forest degradation to cover large areas (...) and guarantees to protect the rights of indigenous peoples, our best allies against deforestation" , declared to AFP Christophe Hansen (EPP, right), negotiator for Parliament. Importers will thus have to "verify compliance with the legislation of the country of production, in terms of human rights, and ensure that the rights of the indigenous populations concerned have been respected".