Co-winner of the Nobel Peace Prize, the Memorial NGO still mistreated by the Putin regime 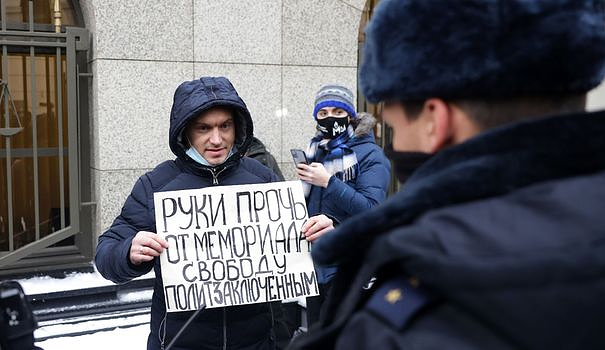 Alexandra's mouth twists. In front of the student, an assembly in black robes congratulates itself on having done justice. The premises of the Russian NGO Memorial, which she and other young people had come to support, will be seized by the Tversköi court, a judicial body in Moscow. The association would be involved in the "rehabilitation of Nazi criminals", according to Russian justice. It was dissolved last January by Vladimir Putin, a few weeks before he decided to invade neighboring Ukraine.

At 1,500 kilometers - nothing on the scale of Russia - another sentence falls. It also targets Memorial, a "champion of human rights, democracy and peaceful coexistence" between Ukraine and Russia, according to the Nobel Peace Prize committee which awarded him the award on Friday, October 7, alongside Belarusian lawyer Ales Bialiatski and the Ukrainian Center for Civil Liberties (CCL). "Ironic", judge Alexandra, questioned by the AFP journalists present in the Moscow courtroom. When the Kremlin tries to permanently ban Memorial, Stockholm and the West bring it to light.

The NGO was a reference in the fight for freedoms and the memory of political repressions in the country and in the former USSR. She is now a figurehead without a ship. Its offices in downtown Moscow, which notably housed the administration of the NGO and exhibitions open to the public, will be "transformed into public property". One more step in its dismantling, and in the rehabilitation of the USSR implemented by Putin.

In the eyes of the court - and the Kremlin - Memorial would have "discredited the authorities and created a false image of the USSR". She would also be a "foreign agent". With this sanction, the Russian authorities hope above all to stifle the NGO, which has constantly challenged it since its foundation in 1989. "We were only ten people (at the time) and we thought that the Perestroika would be the start of everything. But that's not how it happened," one of its founders, Lev Ponomarev, 81, told AFP on Friday. He lives in Paris, where he was granted political asylum.

From the poisoning of Navalny to Stalinist crimes, including abuses in Chechnya, the organization, created by Soviet dissidents including Nobel Peace Prize winner Andrei Sakharov, was authoritative through its rigorous investigations, in particular into abuses by paramilitaries. Russians in Syria. At the same time, Memorial compiled a list of political prisoners, provided them with assistance, as well as migrants and sexual minorities. When it was dissolved last December, a certain Liz Truss, head of British diplomacy now Prime Minister, spoke of a "frightening blow" to freedom of expression in Russia.

It is above all for its work in Chechnya that the NGO became known in the West. During the Chechen conflicts of the 1990s and 2000s, Memorial employees were on the ground, documenting the abuses of Russian soldiers and their local auxiliaries. In 2009, the head of the NGO in Chechnya, Natalia Estemirova, was shot in the head in Grozny. The same year, Memorial received the Sakharov Prize from the European Parliament. Another symbol.

In 2018, the NGO withdrew from Chechnya. Its local manager, Oïoub Titiev, was convicted in a drug case denounced as a set-up. Since then, the NGO has continued to work in Russia, making sure to establish a memory of the dictatorship and the abuses of the autocracy, despite the condemnations of the regime. "A country that had left the totalitarian system is returning to it," explained last April to AFP, Oleg Orlov, one of the historic leaders of Memorial.