Climate: will the countries of the North have to pay for the damage caused by global warming?

Unprecedented rains whose intensity has been reinforced by climate change, two million homes destroyed, 1,700 dead and a poverty rate that could almost double. 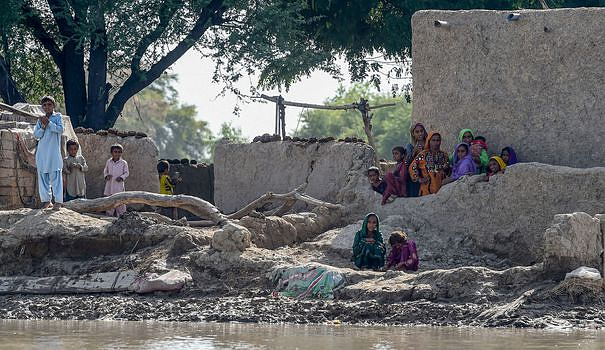 Unprecedented rains whose intensity has been reinforced by climate change, two million homes destroyed, 1,700 dead and a poverty rate that could almost double. Pakistan is only responsible for less than 1% of global greenhouse gas emissions, but is among the countries most affected by extreme weather events due to global warming. This is the heart of the subject of "loss and damage", an area of ​​climate negotiation that will be at the center of discussions at COP 27, which will be held from November 6 to 18 in Sharm el-Sheikh, Egypt.

A technical and eminently political subject, loss and damage refers to the inevitable damage caused by global warming, damage that could not be prevented by the reduction of greenhouse gas emissions, or by adaptation. For nearly thirty years, representatives of small island states have been fighting to make this issue heard. For them, climate change is a long-standing reality, while rising waters sometimes threaten even the physical existence of their territory.

"Since the 1990s, their main demands have changed little. These losses include physical damage, economic losses linked to reduced yields, and irreversible losses, such as lives, or even parts of cultural heritage. “, explains Lola Vallejo, director of the climate program at the Institute for Sustainable Development and International Relations. In 2018, a large study estimated the amount of these losses at between 250 billion and 500 billion euros per year until 2030, and it could reach 1,700 billion in 2050.

The subject is sensitive, because it directly raises the question of the responsibility of the countries of the North in the current climate change. "We can no longer deny that the historic emissions of Northern countries are partly responsible for the impacts that we see in Southern countries", recalls Aurore Mathieu, in charge of international policies within the NGO Réseau action climat. . "This question has been there since the beginning of the climate negotiations, and yet the States have always turned around, and still refuse to talk about compensation", notes Lola Vallejo. These diplomatic mistakes have often confined the issue of loss and damage to the establishment of frameworks for building an international dialogue on how to respond to it. But, with the increase in climatic disasters and the distrust of the countries of the South towards the North, the patience of the most vulnerable States is coming to an end. "Now, developing countries no longer need dialogue, but money to rebuild themselves after these disasters", insists Aurore Mathieu.

For the moment, the negotiations have stalled on the merits. Should we create an envelope dedicated to loss and damage, in addition to the various funding channels that already exist for mitigation or adaptation? During the pre-COP 27 held in the Democratic Republic of the Congo at the beginning of October, the French Minister for Energy Transition did recognize that the issue of loss and damage was "essential", but rejected the idea of ​​" create yet another fund that will arouse the same reservations". Within the EU, not all states play the same score. On October 14, Denmark took a first step towards a dedicated fund and released 13 million euros, which will above all be directed to the countries of the Sahel and the small island states. What for ? "There needs to be a discussion to agree on what good spending should be. For example, developing early warning systems or thinking about how to contribute to more insurance at the individual level in these countries", recalls Lola Vallejo.

Finally, there is the question of funding methods. The Prime Minister of Barbados, Mia Mottley, is counting on part of the 650 billion dollars in special drawing rights from the International Monetary Fund which have been injected into the world economy in 2021 to deal with Covid-19. The Secretary General of the UN, Antonio Guterres, is proposing a tax on the "exceptional profits" made by the fossil fuel industry... Concrete solutions, but which do not remove the risk of a divide between the North and South, as tensions are crystallizing today over the non-respect of financial and climate commitments made by developed countries.