Two climate activists used one of the most famous pictures from the Old Masters Picture Gallery in Dresden for an action on Tuesday. 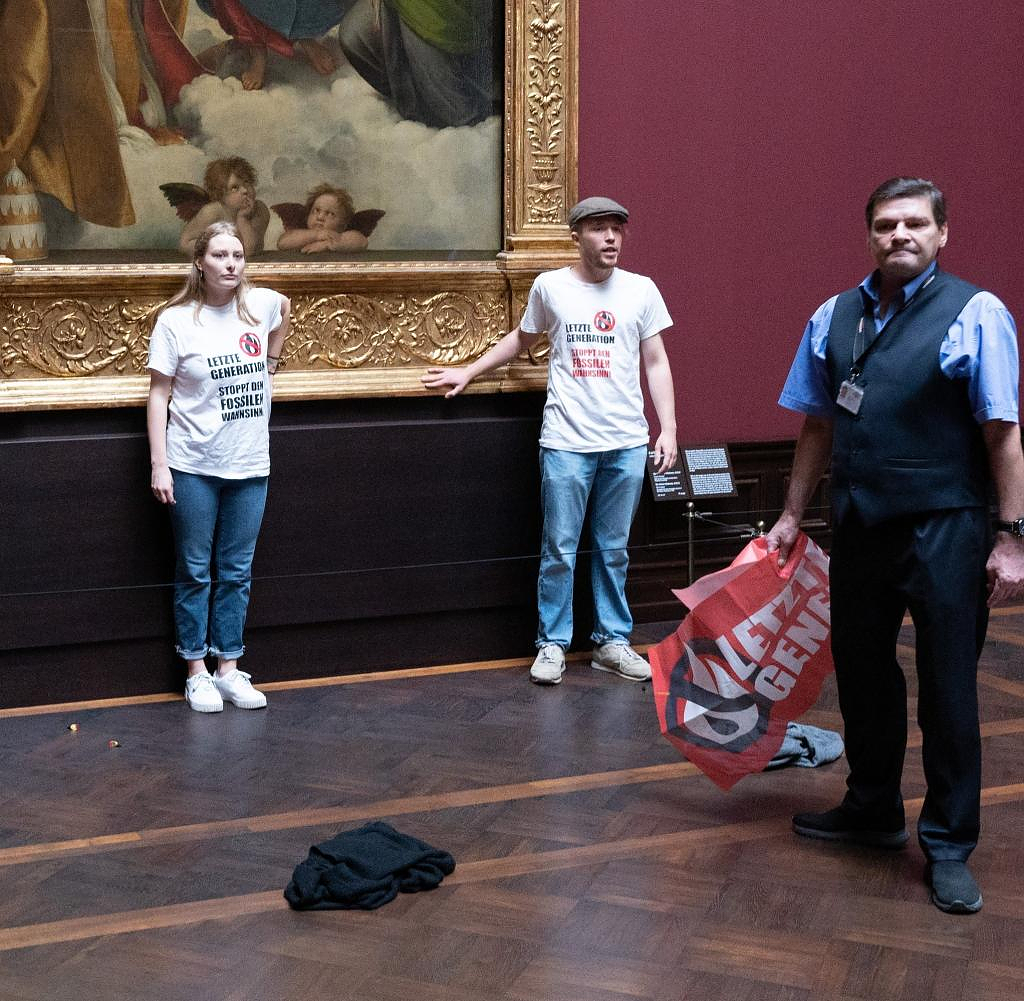 Two climate activists used one of the most famous pictures from the Old Masters Picture Gallery in Dresden for an action on Tuesday. According to a spokeswoman for the group "Last Generation", both of them stuck to the frame of Raphael's "Sistine Madonna". This was confirmed by a spokeswoman for the Dresden State Art Collections.

To do this, the 21 and 28-year-old activists first got over the barrier in front of the picture. When the alarm went off, security guards cleared the room, according to a reporter from the dpa news agency. Shortly after the action, it was still unclear whether the painting or the frame had been damaged.

According to their own statements, they want to use the campaign to demonstrate against the climate policy of the federal government. The global climate catastrophe is "unignorable," it said in a statement. Global warming affects everyone: "Everything we hold dear will be destroyed by the climate catastrophe." Action must be taken immediately.

The "Sistine Madonna" is one of the most famous paintings in Dresden's Old Masters Gallery in the Zwinger. The Italian Raphael created the image of the Virgin Mary in the years 1512 and 1513 for the high altar of the monastery church in Piacenza.

The "Sistine Madonna" is a strong symbol, said the 21-year-old activist Maike Grunst. “Mary and Jesus look to the future with fear. They look forward to Christ's death on the cross. An equally predictable death will also be the result of climate collapse. And all over the world.”

This year, climate activists of the "last generation" have already blocked hundreds of streets nationwide. In Leipzig and Dresden, among other places, activists stuck to the streets and obstructed traffic. The activists are demanding that Chancellor Olaf Scholz (SPD) and Economics Minister Robert Habeck (Greens) do more to expand renewable energies.

Two days earlier, activists from the group demonstrated in front of a famous fresco in the northern Italian city of Padua, triggering a police operation. Two young men chained themselves to a railing inside the Cappella degli Scrovegni, a chapel known for its murals, Sunday, according to videos of the movement online.

While tourists walked through the hall to admire works of art, the two warned about the development of the climate. In the end, police officers carried the demonstrators out of the church. In the past, the “last generation” blocked roadways in Italy several times, like in Germany, including sections of the important motorway ring around Rome.

‹ ›
Keywords:
TexttospeechNewsteamDresdenAufstand Der Letzten Generation (Aktivisten)GrüneItalienGemäldegalerieKrimiSixtinische Madonna
Your comment has been forwarded to the administrator for approval.×
Warning! Will constitute a criminal offense, illegal, threatening, offensive, insulting and swearing, derogatory, defamatory, vulgar, pornographic, indecent, personality rights, damaging or similar nature in the nature of all kinds of financial content, legal, criminal and administrative responsibility for the content of the sender member / members are belong.
Related News