Climate: a "pre-COP" on African soil opens in Kinshasa

This type of preparatory meeting is not a framework for formal negotiations but should allow different countries, groups and organizations to take stock of possible progress and obstacles to be feared during the COP27 on climate change scheduled for Sharm-el- Sheikh from November 6 to 18. 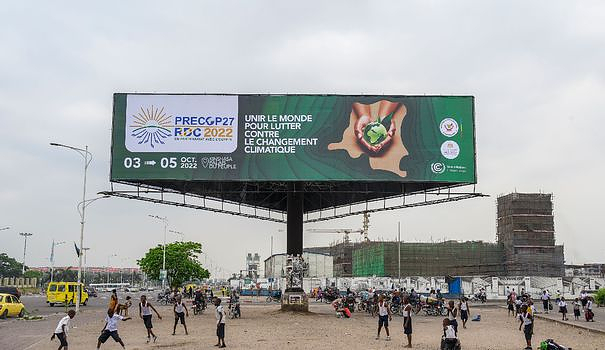 This type of preparatory meeting is not a framework for formal negotiations but should allow different countries, groups and organizations to take stock of possible progress and obstacles to be feared during the COP27 on climate change scheduled for Sharm-el- Sheikh from November 6 to 18.

After the opening ceremony at the people's palace, seat of the Parliament of the Democratic Republic of Congo, the participants will discuss for two days around the usual themes of climate negotiations: adaptation, mitigation, finance, "losses and damages". Many bilaterals will also take place between Europeans, Africans, Asians, Americans, the United States being represented by their special envoy for the climate John Kerry.

"The COP and the pre-COP being organized on the African continent, the accent will certainly be placed on the support of the countries of the South by the industrialized and polluting countries", recently analyzed a Western diplomatic source.

At the previous COP, in November 2021 in Glasgow, the international community reaffirmed its objective of containing global warming to 1.5°C compared to the pre-industrial era, a target set in 2015 by "the 'Paris agreement' but for the time being out of reach, since we are already at nearly 1.2°C.

Discussions have since taken place on how to achieve this ambition, but no significant progress has been made, particularly in terms of funding, an issue that the Egyptian Presidency of the COP is now displaying as one of its priorities for the Sharm summit. -el-Sheikh.

In Glasgow, the poor countries, the least responsible for global warming but the most exposed to its consequences, had asked for a specific mechanism to take into account the "losses and damages" (or "damages") caused by climate change.

The rich countries, often the biggest emitters of greenhouse gases, had rejected this claim and only conceded the holding until 2024 of a "dialogue" on the "modalities" of financing.

Rather than a specific "trust fund", some countries, such as France, lean more towards the financing of "concrete projects", specifies the French Ministry of Energy Transition.

Rich countries should also be reminded once again in Kinshasa that they are still not respecting their commitment to increase their aid to developing countries to 100 billion dollars a year to enable them to fight against climate change.

This demand for "climate justice" was one of the watchwords of a recent demonstration in Kinshasa by young Congolese climate activists who, like young people around the world, demand that international high masses "act". , rather than making "broken promises".

The DRC will also take advantage of the pre-COP to present itself as a "solution country".

In addition to its resources in key minerals for the energy transition (copper, cobalt, lithium, etc.), the huge Central African country has some 160 million hectares of tropical forest, which makes it a "green lung "capable of absorbing carbon and contributing to the fight against climate change. To preserve it, the DRC is asking for international financial support, while claiming its right to exploit its oil.