Clashes in Chile for the commemoration of the 2019 social uprising

Shops in the city center have lowered their curtains, the exit from classes has been exceptionally advanced and 25,000 police have been deployed in anticipation of new clashes, as was the case during the two previous October 18ths. 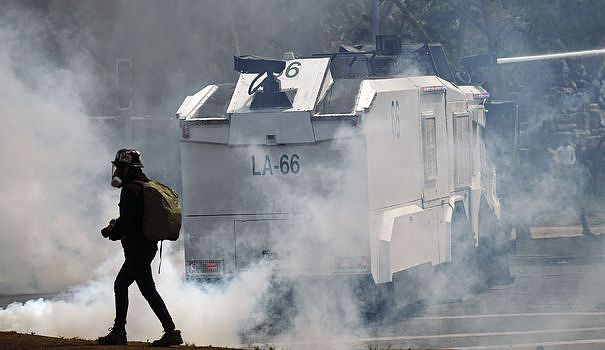 Shops in the city center have lowered their curtains, the exit from classes has been exceptionally advanced and 25,000 police have been deployed in anticipation of new clashes, as was the case during the two previous October 18ths.

In 2019, the discontent of students against the increase in the price of the metro ticket had been the starting point of a revolt to demand more social justice.

Some 2,300 people demonstrated in Chile on Tuesday, including several hundred in the capital, a mobilization much lower than those of the previous two years but which was also marked by incidents in Santiago, in particular the fire of a truck or the theft of two bus.

"There were around fifty arrests, thirteen police officers were injured and some 700 people committed crimes" at the national level, said Deputy Interior Minister Manuel Monsalve.

Police used water cannons and tear gas against burning barricades and to disperse rallies around Place d'Italie, the traditional epicenter of the 345 demonstrations that repeated between October 18, 2019 and March 20, 2020, before the pandemic put an end to the social turmoil, according to the National Institute of Human Rights (INDH).

In five months, around 30 people were killed in scuffles with the police, and some 400 suffered eye injuries.

To get out of the crisis, the previous conservative government had initiated a process of changing the constitution. Written under the dictatorship of Augusto Pinochet (1973-1990), the current constitution is considered to be a brake on any fundamental social reform against the liberal doctrines which notably govern health, education or pensions.

But the Chileans rejected at the beginning of September by 62% the proposal which emanated from a Constituent Assembly elected in May 2021. Since then, government and opposition have been consulting to establish a new constitutional process.

On Tuesday, President Gabriel Boric, 36, who was sworn in in March after promising to establish a welfare state, admitted that his government has "still not carried out the reforms" that improve "the social rights of Chilean women. and Chileans".

According to him, the 2019 uprising “was not an anti-capitalist revolution” but “an expression of pain and fractures in our society”.