China: Xi Jinping launches his 3rd term with a nod to Mao

Surrounded by the new management team - six men all dressed in matching navy blue windbreakers - the 69-year-old president has been in recent days in Yan'an (north), considered the cradle of the Chinese Communist Party ( CCP). 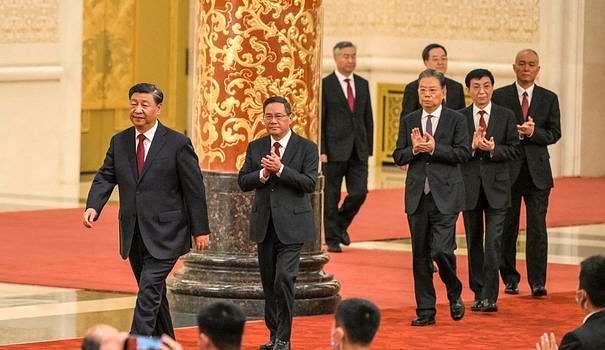 Surrounded by the new management team - six men all dressed in matching navy blue windbreakers - the 69-year-old president has been in recent days in Yan'an (north), considered the cradle of the Chinese Communist Party ( CCP).

Analysts believe that this choice portends what the next five years in power of Xi Jinping could look like.

"The visit to Yan'an served to mark the parallel (with Mao) and the absence of opposition," said sinologist Manoj Kewalramani, of the Takshashila Institute in Bengaluru, India.

Xi Jinping has concentrated and personalized power more than any leader since Mao Tse-tung (1949-1976). And the strong man from Beijing won an unprecedented third term as head of the CCP on October 23.

The new Standing Committee of the party, which represents the heart of power in China, is now composed only of its allies, six men.

In the state television news CCTV, a 16-minute report on the visit to Yan'an was embellished with several portraits of Mao.

Among the highlights of this trip: a visit to the former residence of Mao and the place where a crucial meeting of the CCP was held in 1945 which confirmed him as party chairman.

At that time, the political formation was facing a bloody civil war.

"One of the signals that Xi seems to be sending (...) is to prepare for difficult times and for the fight," said sinologist Bill Bishop in his specialized newsletter on China, Sinocism.

In 2012, the leader took his new team to attend an exhibition on the rebirth of the Chinese nation in Beijing. In 2017, they visited the very place where the first CCP congress was held in 1921, in a school in Shanghai.

"The first trips after each party congress are intended to recall the original mission," said political scientist Wen-Ti Sung of the Australian National University.

According to state media, Xi Jinping assured last Thursday that his new standing committee would "inherit and continue the fine revolutionary traditions formed by the party during the Yan'an period".

Nestled in the arid and remote mountains of northern China, Yan'an is a sacred place for the CCP.

This is where party members dug in after the Long March, a grueling cross-country trek on foot from 1934 to 1935 to escape Nationalist troops during the Civil War.

Only a handful of survivors made it to Yan'an. Mao and his allies - including Xi Jinping's father - lived among peasants in basements while they prepared for their military campaign.

Since their victory, the "Yan'an period" has been celebrated in the party as a perfect example of its ability to withstand adversity.

More than 10,000 people, including intellectuals and artists, have been killed in a purge campaign known as the "Rectification of Yan'an", intended to strengthen the ruler's power.

Thursday, Xi Jinping assured that "during the Yan'an rectification movement, the whole party has unified under the banner of Mao Tse-tung and achieved unprecedented cohesion", according to television. State.

Statements that echo the strict discipline within the party imposed since it came to power in 2012, notably via a formidable anti-corruption campaign which has enabled it to oust its rivals.

Mr. Xi sees himself as an "heir to the revolution", believes the sinologist Alfred L. Chan, and he multiplies the references between the history of the country and his personal history, as he did this time also in Yan' year.

At the height of the Cultural Revolution (1966-1976), Xi Jinping, then a teenager and whose father was ostracized by the regime, was sent to the village of Liangjiahe. He had slept in caves and had been shocked by the hard work.

Far from resenting it, he often cites this period of his life as very formative, hoping to make an example of it for the party.

"Xi wants to return to an orthodox communism in China, like Mao's," said Alfred Wu, an expert on Chinese politics at the National University of Singapore.