Authorities have ordered residents of eight districts in Zhengzhou, central Henan Province, not to leave the area for the next five days. 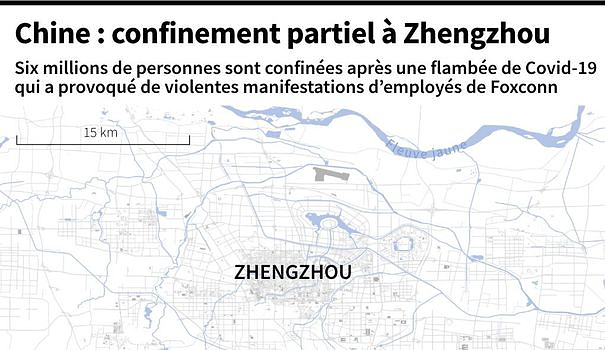 Authorities have ordered residents of eight districts in Zhengzhou, central Henan Province, not to leave the area for the next five days.

Barricades have been erected around residential buildings considered high risk and movement checkpoints have been established in the streets.

Only a small amount of Covid-19 cases have been recorded in this city of 12.6 million people.

The lockdown comes after violent protests by hundreds of workers this week at the Foxconn factory on the outskirts of the city, which employs more than 200,000 people and nicknamed "iPhone city" because it's the biggest factory. to Apple's phone manufacturing world.

New images of protests were shared on social media on Friday and their geolocation has been verified by AFP. It shows a crowd marching down a street in the east of the city, some carrying signs.

“There are so many people,” a man can be heard saying in this video. AFP could not verify when the demonstration took place.

Many disgruntled employees left the factory on Thursday, confined since October due to an outbreak of Covid cases, in exchange for bonuses of 10,000 yuan (1,340 euros).

On Friday, the number of cases in China reached 33,000, a record since the start of the pandemic, even if the figure remains very modest in this country of 1.4 billion inhabitants and the vast majority of cases are asymptomatic.

In the industrial city of Canton (southeast), millions of people have been ordered not to leave their homes without a negative test.

Videos shared on social media on Friday and geotagged by AFP showed residents of this town, in the Haizhu district, dismantling barriers and throwing objects at police officers dressed in white coveralls.