China: Shanghai under heavy police surveillance after a weekend of protests

Since a deadly fire in the city of Urumqi, in the north-west of the country, anger is brewing in China, with many people accusing the draconian measures taken against the epidemic of having hindered relief. 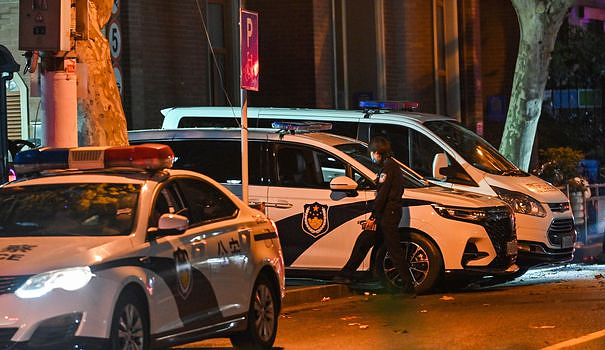 Since a deadly fire in the city of Urumqi, in the north-west of the country, anger is brewing in China, with many people accusing the draconian measures taken against the epidemic of having hindered relief.

Large rallies took place in downtown Shanghai on Sunday, where police clashed with demonstrators converging on Wulumuqi Street, the Mandarin name for Urumqi.

On Monday, the police presence was again imposing in the area and, during the day, AFP saw officers arrest four people, then release one.

Roads that had been closed the day before were reopened to traffic but also under heavy police presence.

The streets of several blocks in the Wulumuqi Street area were overrun with blue metal barriers erected overnight, according to an AFP reporter.

He counted 12 police cars for 100 meters along Wulumuqi Street in Shanghai.

"Tonight, the atmosphere is tense. There are a lot of police around," a witness told AFP at nightfall.

Using the pseudonym Taku, he said he lost his job with an international airline due to the pandemic and believed the protests were justified.

"The rest of the world has reopened, but China remains paralyzed because of a zero-Covid policy... This city is going crazy," he added, "hoping impatiently for something to happen." .

Another young man told AFP that police specifically asked him if he had downloaded foreign apps on his phone, a question many Chinese people apparently had to answer according to social media posts.

A woman, in her thirties, who works in a nearby store complained of the decline in her activity. "The atmosphere is strange, but I don't feel in danger," she said.

Nearby, the large People's Square was closed to the public on Monday evening and bars in the area confirmed to AFP that they had been ordered to close at 10:00 p.m. (2:00 p.m. GMT) for "contamination checks".

Clusters of police officers in reflective jackets took up positions outside each subway exit.

But overall, the atmosphere seemed rather peaceful on Monday evening. AFP just saw a group of four police officers arresting two young men, searching their bags and checking their cameras and mobile phones before letting them go after a few minutes, a "routine check", according to the police.

The police presence has also been reinforced around the town hall, dozens of police vans and mobile units parked along the road.

Several people have been asked to delete photos from their mobile phones, AFP found on Monday in the Wulumuqi Street district.

"I am Chinese. I love my homeland very much. Why can't I take a picture of the streets of my country?" a young girl told the police. Forced to comply with this injunction, she was then allowed to go on her way.

The young man who was freed told AFP he was taken away for filming the junction where protests had previously taken place. He was taken to a police van before being quickly released. "As a citizen of Shanghai, I have the freedom to record this," said a young man briefly arrested for filming a protest. "It's like that now in Shanghai. There is no freedom."