China's head of state and party leader Xi Jinping further expanded his power at the Communist Party Congress in Beijing. 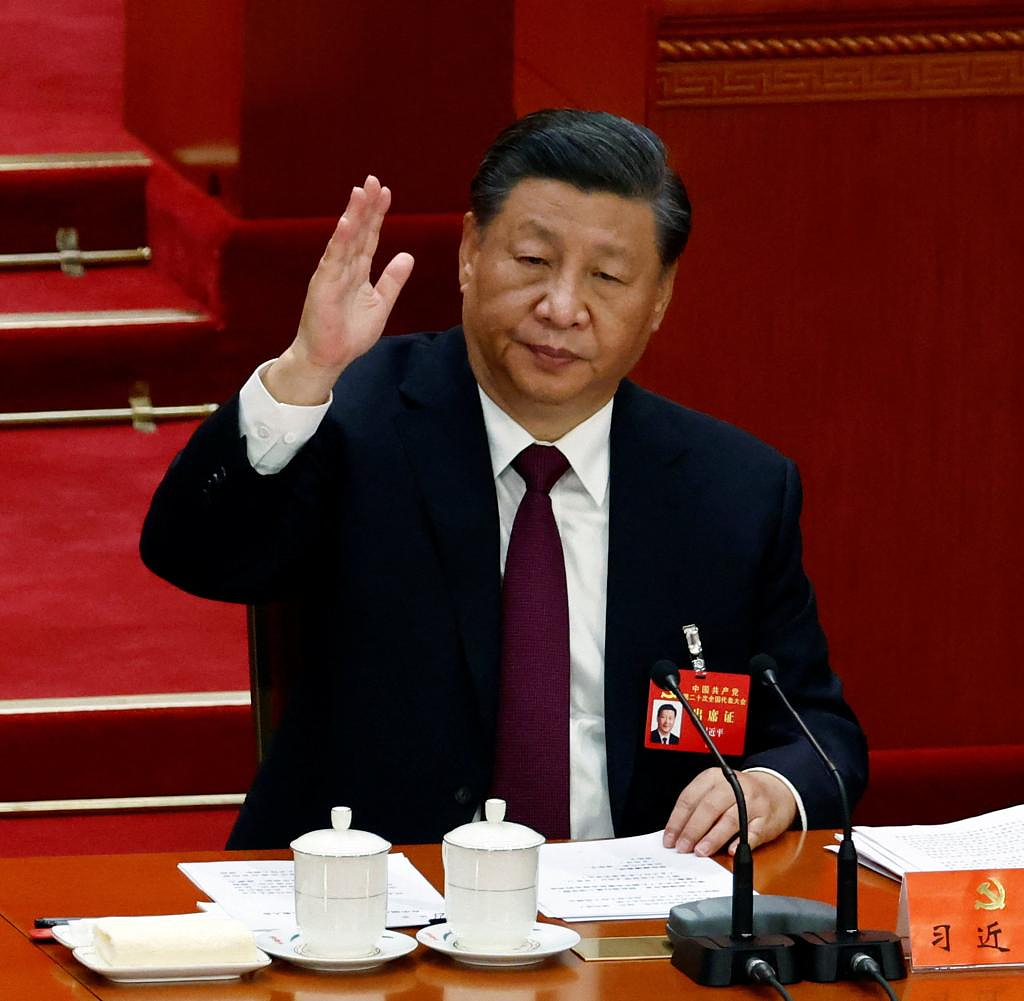 China's head of state and party leader Xi Jinping further expanded his power at the Communist Party Congress in Beijing. At the end of the party congress, which only takes place every five years, the 2,300 delegates in Beijing on Saturday anchored his ideology and lasting leadership role even more deeply in the party constitution. The 69-year-old wants to take up an unusual third term as Secretary-General on Sunday, thereby defying previously respected age limits.

The carefully orchestrated week-long session was marred by an incident involving former leader Hu Jintao. The frail-looking 79-year-old was taken off the podium from his place next to Xi Jinping by two room stewards, apparently against his will, shortly before the constitutional amendments. Shortly before, foreign media representatives had been allowed onto the grandstand of the Great Hall of the People. Hu Jintao is not necessarily seen as a supporter of the party leader and his sole rule.

Delegates called for the inclusion of several theoretical concepts in the Constitution. Among them are the "Two Establishments" (Liang ge queli), with which the power position of Xi Jinping as the core of the party and the "Xi Jinping's ideas for socialism with Chinese characteristics in a new era" are laid down as a guideline. The “Four Realms of Consciousness” (Si ge yishi) are also to be supplemented. They demand loyalty, political integrity, leadership support and adherence to the party line.

The “Four Self-Confidence” (Si ge zixin), which relate to the course of the party, party theories, socialism with Chinese characteristics and Chinese culture, will also be compulsory. Finally, the demand for the "Two Preservations" (Liang geweihu) was added, which concern Xi Jinping's key position and the party's authority and centralized, unified leadership.

"The most important political innovation of this party congress cannot be found on paper: Instead of making room for a younger successor after two terms as Secretary General, Xi Jinping is setting himself up as his own successor," said Katja Drinhausen from the China Institute Merics in Berlin . In his first decade in office, Xi Jinping formulated "great ambitions" for China and the Communist Party. "He has now underpinned them and paved the way for them to become a reality."

Congress also resolved to strengthen the military and build it into "world-class armed forces." The independence forces in Taiwan should also be fought decisively, it said. The Chinese leadership regards the democratic island republic as part of the People's Republic and threatens to conquer it. Taiwan, on the other hand, has long considered itself independent.

The newly appointed Central Committee is scheduled to hold its first plenary session on Sunday to confirm the reshuffle of the Politburo and its powerful Standing Committee. Xi Jinping is to be confirmed as Secretary General and head of the Military Commission for an unusual third term. "He may find his third term in power to be the hardest yet," said Richard McGregor of Australia's Lowy Institute. A potential successor will not be set up.

Premier Li Keqiang falls victim to a reorganization at the top of the Communist Party. Number two behind Xi Jinping is one of four of the seven members of the powerful CCP Politburo Standing Committee who are losing their posts on the body. They were not on the list released on Saturday by the new 205-strong Central Committee of the ruling communists.

Also removed from the list were Shanghai Party leader Han Zheng, Vice Premier Wang Yang and Li Zhanshu, a long-time Xi ally and head of the largely ceremonial National People's Congress. The new Central Committee was confirmed at the final meeting, which established the leadership and agenda for the next five years.

What was behind the incident with ex-president Hu Jintao remained unclear. He belongs to the Communist Youth League camp in the party, which was weakened by Xi Jinping. After two terms in office, Hu Jintao handed over the office of Secretary-General to Xi Jinping in 2012. He stands for the old "collective" management model with representatives from different factions and with age limits. This was to prevent any leader from becoming as powerful as the founder of the state and revolutionary Mao Tsetung, who had brought chaos to the country. History should not repeat itself.

But Xi Jinping has abolished this institutionalization and created a personalized system in which no one else can come close to him, noted the well-known US political scientist Francis Fukuyama in "The Atlantic". "The concentration of authority by one person has led to poor decision-making processes." Among other things, he cited Xi Jinping's failed interventions in business and the tech sector and his adherence to the strict zero-Covid strategy, which has become a heavy burden with lockdowns has become for the economy.

‹ ›
Keywords:
NewsteamXi JinpingHu JintaoChinaPolitikKommunistische Partei Chinas (Geo: ChV)Peking
Your comment has been forwarded to the administrator for approval.×
Warning! Will constitute a criminal offense, illegal, threatening, offensive, insulting and swearing, derogatory, defamatory, vulgar, pornographic, indecent, personality rights, damaging or similar nature in the nature of all kinds of financial content, legal, criminal and administrative responsibility for the content of the sender member / members are belong.
Related News