In power from 1989 to 2003, Jiang Zemin died Wednesday at the age of 96 from leukemia and multiple organ failure, state media said, adding that funeral preparations had begun . 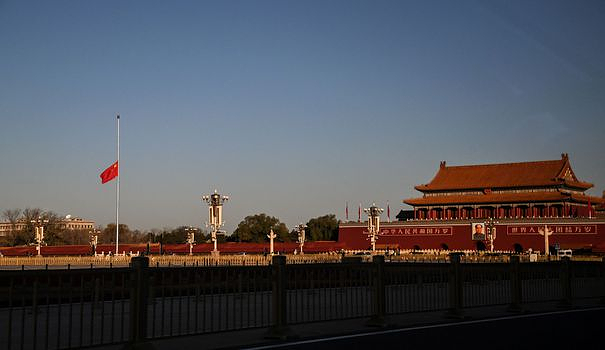 In power from 1989 to 2003, Jiang Zemin died Wednesday at the age of 96 from leukemia and multiple organ failure, state media said, adding that funeral preparations had begun .

In his hometown Yanghzou and not far from there in Shanghai, flowers were laid in tribute while a large police force was in place near the hospital where he died, AFP journalists noted.

Around 12:45 p.m. (0445 GMT), a convoy of vehicles left the hospital, led by a car with what appeared to be a wreath of yellow flowers on its hood. The convoy then headed for Hongqiao Airport.

An hour earlier, police ordered passers-by to leave the intersection near the hospital as a crowd of onlookers gathered there, dressed in dark-colored clothes and wearing face masks.

Photos sent to AFP by a local resident showed a group of people lined up on the sidewalk carrying chrysanthemums.

One of them carried a banner saying "Have a good trip, old classmate".

Officers in yellow jackets were present along the road, with some also taking up positions on tall buildings overlooking the highway near there.

A local resident told AFP that he received the surprise announcement on Wednesday evening that his child's school would be closed the next day for "traffic reasons".

He added that he was banned from leaving his residential compound before 5:00 p.m. Thursday and was ordered to close all his windows, without any reason being specified.

No date has been given for the event, which is expected to take place in Beijing.

The Chinese remain divided on the legacy left by Jiang Zemin.

If many of them remember a jovial and humorous leader who brought a breath of fresh air to an often narrow communist leadership, others do not forget that, under his mandate, corruption, inequality and repression of political activists have increased markedly.

Once retired, however, he was viewed with fondness by his Chinese fans of generations Y (born between the early 1980s and the end of the 1990s) and Z (late 1990s to 2010), who were called themselves the "faithful of the toad", fascinated by his countenance reminiscent of the batrachian and his eccentric manias.

Within an hour on Wednesday, more than half a million people had commented on a post by state broadcaster CCTV announcing the death on the Weibo platform (the Chinese equivalent of Twitter).

Many referred to the former leader as "Grandfather Jiang".

Photos shared on social media on Thursday showed the walls of her former home in Yangzhou littered with bouquets of flowers, with some people bowing in respect as they put them down.

A nearby florist told AFP that it had received more than 100 orders from people wishing to pay tribute to the ex-leader, including Chinese people living in other cities and wishing to have them delivered using mobile applications.

CCTV said on Wednesday that flags would be flown at half-mast on some government buildings until the funeral.

State media and public companies had switched their websites to black and white, as well as certain applications such as Alipay, Taobao and McDonald's.

Russian President Vladimir Putin was one of the first foreign leaders to pay tribute to Jiang Zemin, a "sincere friend" of Russia and "an outstanding statesman".

UN Secretary General Antonio Guterres called Mr. Jiang an "unwavering defender of the international commitment" of his country, and praised his "human warmth" and his "open-mindedness".