Since the massive demonstrations at the end of November by Chinese people tired of the excesses of this health strategy, several cities have announced the end of large-scale PCR tests or quarantine for infected people. 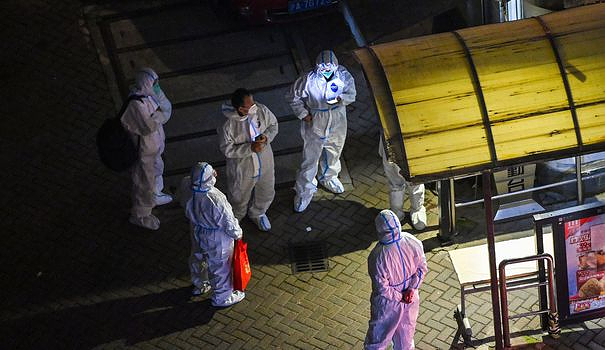 Since the massive demonstrations at the end of November by Chinese people tired of the excesses of this health strategy, several cities have announced the end of large-scale PCR tests or quarantine for infected people.

But according to the Nomura bank, 53 cities, representing about a third of the country's 1.4 billion people, were still enforcing forms of travel restrictions as of Monday.

But videos published on Tuesday and geolocated by AFP show a crowd of students from Nanking University of Technology demonstrating at night in order to be able to leave the campus.

“You get your power from the students, not from yourselves,” one participant shouted at an official. "Be at the service of the students!".

A third-year student, wishing to remain anonymous, told AFP that the protest took place after the school announced that the campus would be sealed off for five days following the discovery of a positive case.

Many Chinese universities are still confined. Their students must apply to leave and visitors are prohibited.

In the video, students are seen arguing with university officials.

"If you touch us, it will become a new Foxconn here!" Shouts a young person in reference to the violent demonstrations of workers last month in the Chinese factory of the Taiwanese giant, which manufactures iPhones for Apple.

During the rallies at the end of November, the demonstrators, mostly young, demanded the lifting of the restrictions which have affected their lives since 2020.

Hundreds or even thousands of students have since demonstrated on their campuses, from the prestigious Beijing University of Tsinghua to establishments in Xi'an (center), Canton (south) or Wuhan (center).

In parallel with the repressive component, the authorities are easing certain restrictions.

Beijing announced on Tuesday that parks, office buildings and businesses, including supermarkets, will no longer require the presentation of a negative PCR test.

Large companies are allowed to set their own testing requirements.

For Xie Shangguang, a 22-year-old student met in the trendy shopping district of Taikoo Li in Beijing, these announcements are "good news" because the capital is "coming back to life".

"Afterwards, we can't release everything or block everything at once, we have to go little by little," he told AFP.

"The only thing that makes me a little sad is the fact that we can't go to a restaurant yet," he explains, picking up a take-out order of high-end burgers.

Another resident, Wu Siqi, 28, also believes that the reopening should be gradual.

"The current easing is already not bad," she told AFP. "You can't tell people, overnight, you don't have to do anything anymore."

Several other major cities such as Shanghai or Hangzhou have also reduced their PCR test requirements.

In Canton, the authorities are now calling on residents to stay at home if they have symptoms. A radical reversal, because people who tested positive were previously placed in quarantine centers, with random comfort.