China: 38 dead in the fire of a factory in the center of the country

The tragedy, for which the authorities have apologized, took place Monday afternoon in a factory in the city of Anyang, in Henan province, according to the news agency China news. 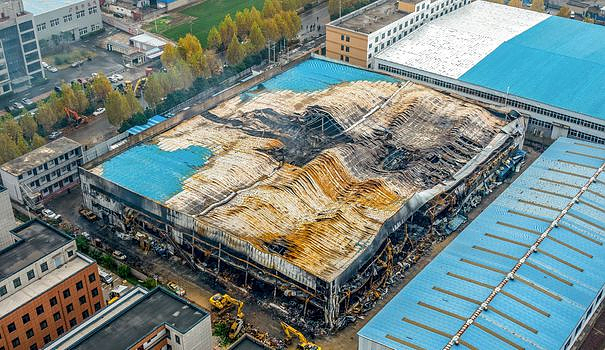 The tragedy, for which the authorities have apologized, took place Monday afternoon in a factory in the city of Anyang, in Henan province, according to the news agency China news.

According to state media, emergency services were alerted to a fire at 4:22 p.m. (0822 GMT) at the Kaixinda Trading site.

“Public security, emergency response services, city administration and power supply units quickly arrived on the scene for rescue and rescue operations,” she added, adding. that the fire had been extinguished around 11:00 p.m.

Footage released by state media shows thick clouds of black smoke from the blaze, with at least two fire engines on scene battling the flames.

Another video shows the charred carcass of the building after the fire was extinguished.

An initial report had reported 36 dead and two missing.

Separately, two people were injured and taken to hospital, but their lives are not in danger, CCTV reported.

Suspects have been taken into custody in connection with the fire, authorities said.

"According to the first elements, this accident was triggered by a manipulation contrary to the regulations on the part of an employee of the company. (An operation of) electric welding caused the fire", indicated CCTV.

President Xi Jinping issued a directive on Tuesday, calling for "every effort" to be made to "treat the injured".

“It is also necessary to shed full light on this incident and to establish responsibilities with the utmost seriousness,” he stressed.

Faced with the proliferation of this type of accident in China, he urged all local authorities in the country to "assume their responsibilities in terms of occupational safety and to investigate all types" of risks.

Faced with the repercussions of the affair, the Communist Party secretary in Anyang, the highest political figure in the city, bowed publicly in a sign of apology during a press conference organized on Tuesday evening.

"On behalf of the municipal authorities, (...) I make my deep self-criticism in front of all the inhabitants of the city, and I present to all of society my most sincere apologies," said Yuan Jiajian with a serious face.

According to the Tianyancha database, Kaixinda Trading is a wholesaler of machinery, building materials, non-hazardous chemicals, clothing and firefighting equipment.

Also on Monday, an explosion occurred at a chemical plant in northern China, according to official media which did not put forward a human toll but reported material damage to surrounding buildings.

This incident took place in Taiyuan, capital of Shanxi province, according to Dahebao, a provincial daily which cites the authorities.

According to videos posted on social media, a fire broke out at the site, releasing very dense gray smoke that formed a huge mushroom in the sky.

Other images show housing on the ground strewn with shards of glass, frightened people leaving buildings or even window frames falling at the foot of buildings, due to the blast of the explosion.

In March 2019, the explosion of a chemical factory in Yancheng, a city located 260 kilometers north of Shanghai, caused the death of 78 people and devastated homes for several kilometers around.

But one of the most serious industrial accidents is the one that occurred in 2015 in Tianjin (north). A gigantic explosion in a chemical warehouse had killed at least 165 people in this large port city located 120 kilometers southeast of Beijing.