Chimpanzees have a sense of rhythm all their own

Everyone has their own style: some practice a very rock beat and others more jazzy, indicates the study published in the British journal Animal Behaviour. 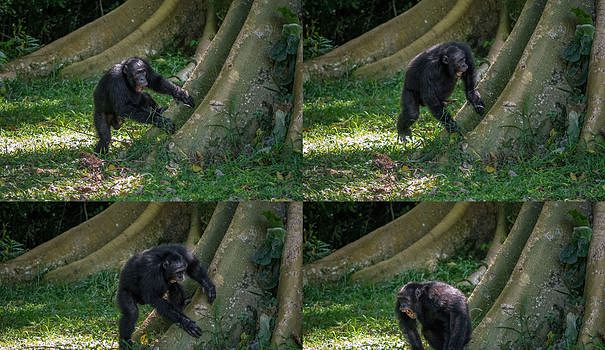 Everyone has their own style: some practice a very rock beat and others more jazzy, indicates the study published in the British journal Animal Behaviour. But in addition, these animals know how to modify it so as not to reveal the place where they are.

Researchers tracked a group of Waibira chimpanzees in the western Budongo forest, recording and analyzing the strikes of seven males.

Their sounds travel more than a kilometer through the thick forest and serve as a means of communication for the moving chimpanzees, according to Vesta Eleuteri, lead author of the study.

The doctoral student explained that she could identify who was playing after just a few weeks. "Tristan, the John Bonham of the forest, plays the drum very quickly with a lot of separate beats regularly," she told AFP, referring to the famous drummer of the rock group Led Zeppelin. His game is "so fast you can barely see his hands".

But other chimpanzees, like Alf or Ila, have a more syncopated style, with a technique in which both feet strike the root almost at the same time, explains British primatologist Catherine Hobaiter, who supervised the work.

This work was carried out by scientists from the Scottish University of St Andrews – which explains why several chimpanzees have been baptized with whiskey names, such as the Talisker.

It has long been known that chimpanzees practice drumming. "But with this study, we understood that they use their own style when they seek contact with other individuals, when they travel, whether they are alone or in a small group," explains Catherine Hobaiter to AFP.

The researchers also discovered that the chimpanzees sometimes chose not to sign their messages, so as not to betray their identity. “They have this remarkable flexibility to express their identity and their style, but also to hide that”, adds the researcher.

While many animals produce sounds that can be associated with music, such as birdsong, chimpanzees may enjoy their music more like humans.

"I believe that chimpanzees, like us, potentially have a sense of rhythm, a sense of music, something that touches them on an emotional level, like the emotion that a great drum solo or other sound evokes in us. important music," says the primatologist.

Studies of chimpanzees focus on their tools or their diet, she notes. "But when we think of human culture, we don't think of the tools used, but of how we dress, of the music we listen to".

The researchers plan to study how other communities of chimpanzees produce sound. They are interested in a species in Guinea, which lives in a savannah almost devoid of trees that can be used as a drum. “We have clues that they might be throwing pebbles against other pebbles,” to produce sounds. "Literally, rock music", according to Catherine Hobaiter.