In autumn, the scent of roasted chestnuts fills the air in many places in Ticino. 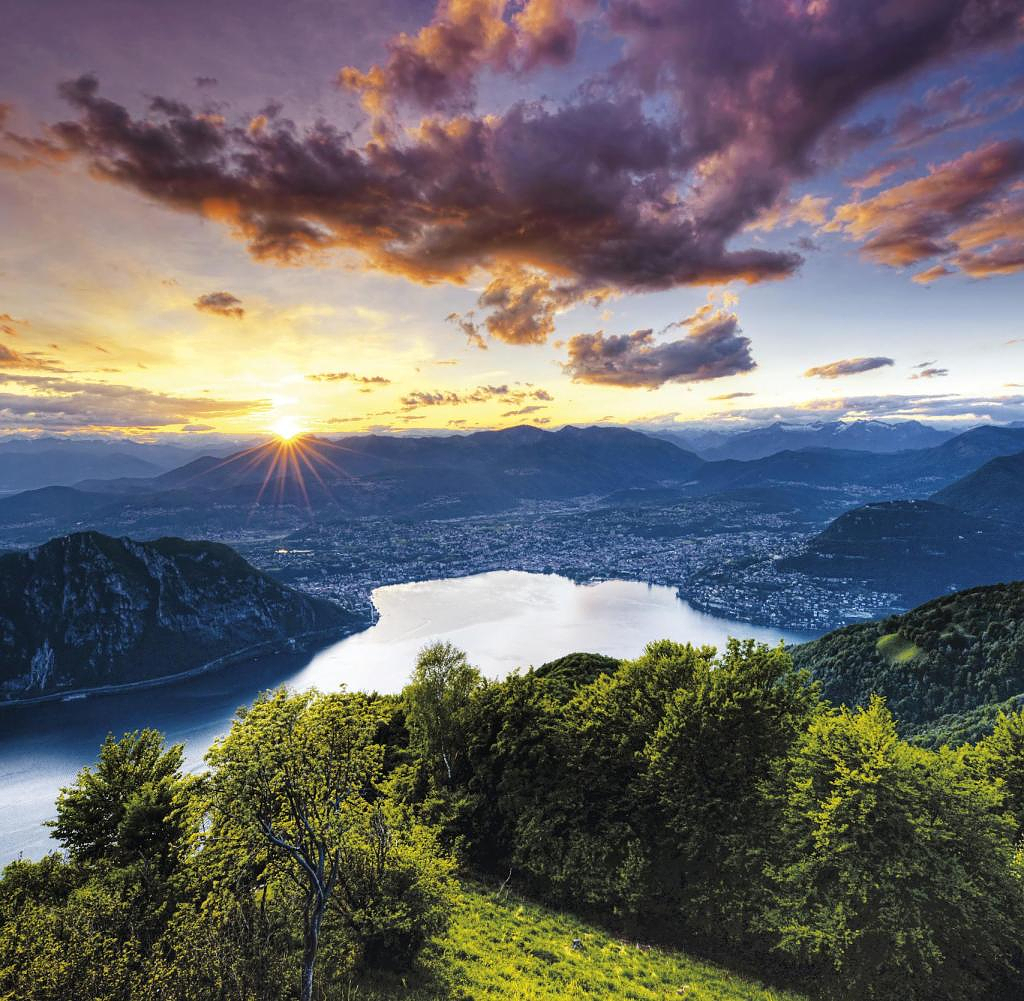 In autumn, the scent of roasted chestnuts fills the air in many places in Ticino. The whole town meets at the chestnut festivals. People chat and eat and tell stories that often revolve around food – the atmosphere is sociable, almost Mediterranean, as befits the Italian-speaking part of Switzerland.

There was a time when chestnuts, which fall on paths all over Ticino in autumn and lie around like little green hedgehogs, were the only food at the end of winter.

So they collected and stocked up: 150 kilograms of chestnuts were calculated for one eater per winter. The nuts were roasted, dried, ground. Flat cakes were baked from the flour, and noodles or nutritious soups were made from it.

Even a dessert was made from sweet chestnuts: Vermicelles – the dessert made from ground chestnuts and lots of sugar is popular all over Switzerland today.

Chestnuts can be found everywhere in the hills behind Lugano, especially on the Sentiero del Castagno hiking trail, a 15-kilometer circular route that leads through chestnut forests in just under five hours of hiking.

Well-designed information boards explain the history and importance of chestnuts: you can learn, for example, that almost everything from the chestnuts in the southern Alps was used for centuries - the shells were burned, chestnut wood is well suited for outdoor structures such as fences thanks to the tannin. The branches, in turn, served as fodder for the goats.

The most precious thing was the edible chestnut, so it got its own celebration, the Castagnata; Chestnut festivals still take place throughout Ticino in October. Although chestnuts are no longer a staple in Ticino, they are an indispensable local specialty. But the canton offers other regional delicacies that can now be tasted at the festivals in autumn.

This definitely applies to Zincarlìn, an almost forgotten, flavorful raw milk cheese from the Muggio Valley in southern Ticino. It is made from cow's and goat's milk and is pressed by hand in the shape of an upside-down cup.

"In the past, almost every household here made cheese," says Marialuce Valtulini, cheesemaker in Salorino: "In our village there are 70 cellars, until a few years ago cheese was stored there, today almost only wine."

The resolute Ticinese native did not want to accept the disappearance of the traditional specialty, professionalized production, had Zincarlìn certified as a regional product and by the Slow Food movement. And saved him with it.

She invites you to taste it in her cellar, through which a cold draft blows - it is Monte Generoso with its crevices and caves that provides this natural refrigerator. The small, handmade loaves lie on shelves.

Valtulini enthusiastically explains how she makes the cheese: add rennet to the milk and cut a cross into it after twelve hours. That breaks the crowd. After 48 hours, she drains the whey, seasons with salt and pepper, and rolls the cheese by hand. They remain in the cellar for two months and are regularly washed with white wine.

Actually. But Signora Valtulini has changed part of her production since meeting her at a chestnut festival in 2016: she uses gin to wash the cheese. At the festival, says Valtulini, "a guy let me taste gin".

The "guy" is standing next to her today and grins. His name is Giona Meyer and he produces local gin together with three other people from Ticino. "Everyone here makes wine, we wanted to make something different," he says.

You work with organic herbs from the region, "In 2016 we prepared our first gin, 500 bottles - they were sold out after two days".

Now they make 25,000 bottles a year. Marialuce Valtulini was so enthusiastic about Ticino gin that she came up with the idea of ​​rubbing some layers of her cheese with the spirit. Thus the latest culinary creation from Ticino was born: Gincarlìn, which tastes even spicier than Zincarlìn.

Gin and Zincarlìn can not only be found on the stands of the autumn festivals, but also in Ticino's top gastronomy. "These are the local products I like to use the most," says Domenico Ruberto, a Calabrian who earned his first Michelin star in Lugano in 2021 with his restaurant "I Due Sud". “You can make more out of gin than gin and tonic. I also use it for risotto,” says the thirtysomething. And he puts Zincarlìn on pizza.

"I Due Sud" cleverly combines the cuisine of the south of Switzerland with that of the south of Italy. "That fits," says Ruberto, both here and there it depends on good ingredients.

Frank Oerthle from the “Arté al Lago” restaurant, who has held his star for ten years, thinks so too. "The Zincarlìn has a brutal taste," says Oerthle. The native Swabian means that as praise. In 1992 he went on holiday to Ticino and decided: I want to work here.

He has been cooking there for 20 years now, modern and Mediterranean. He appreciates the small fennel from Val Colla, buys his meat from the first Ticino breeder of Wagu cattle, and Ticino Loto rice, he says, goes perfectly with sea fish.

Rice from Ticino? Where in the mountainous canton is there supposed to be room for the cultivation of this tropical grain? The answer can be found further north. Where the river Maggia flows into Lake Lugano near Ascona, Loto risotto rice has been grown since 1997. The alluvial delta of the Maggia is Europe's northernmost rice-growing area, although in Ticino the rice fields are not completely flooded as in Asia, here the rice plants get by with less water.

Every autumn, from October, the new harvest lands on the shelves of local shops and in the cooking pots. Loto rice is ideal for a creamy risotto and vacuum-packed as an unusual Swiss souvenir.

The cuisine in Ticino is traditionally hearty, and people had to fill up on the dishes after hard farming work. This explains why – after the discovery of America and the import of corn – polenta made a name for itself in Ticino. Polenta taragna, a thick porridge made from corn and buckwheat semolina, enriched with butter and cheese cubes, is still popular today.

Or Mazzafam, the hunger killer: Potatoes and corn mixed into flat cakes, cheese from the alp is served on top. Such dishes can still be found in classic inns.

A specialty in northern Ticino is farina bóna - literally translated it means "good flour", it is a flour made from roasted corn kernels that gives the dishes a surprising popcorn taste.

The ingredient was invented in the Onsernone Valley around 100 years ago by the miller Annunciata Terribilini. She did what she used to do with rye with corn kernels: roast it.

Some of the grains jumped up, just popcorn, some stayed behind in the pan as little balls, so hard that you could have bitten your teeth on them. The clever miller packed both together, the hard grains and the popcorn, and ground them into "good flour".

The story and the flour were forgotten until 20 years ago, when a teacher reactivated the old mill and is now making Farina bóna again, also a Slow Food product. You can use it for bread and biscuits, for pasta and ice cream; they even offer a popcorn-flavored spread called Bonella.

Another hike could be a good way to end a high-calorie autumn trip to Ticino. If the chestnut tours in the mountains are too demanding for you, you will find wonderful promenades on the banks of the Ticino lakes, often lined with palm trees.

Lake Lugano offers another surprise: you can stroll along it from Lugano to Gandria under shimmering silver olive leaves. Olive trees in Ticino were first mentioned in 769, but in the Middle Ages and the mid-19th century most died after severe winters.

The tradition was revived in the early 1990s, and since then the area around Gandria has been the only olive-growing area in Switzerland. The quality of Ticino olive oil is now so good that it was included in the Swiss Culinary Heritage List in 2021. But it remains a rarity - only around 2000 liters are produced per year.

From Gandria back to Lugano we take the excursion boat. The tour across Lake Lugano, which nestles picturesquely between Monte Brè and Monte San Giorgio in the alpine landscape, is particularly fantastic in sunny autumn weather.

So it's fitting that the station in front of Lugano is called Paradiso - the place with its lake fountain, the pretty little houses and the densely wooded San Salvatore, which is reminiscent of Rio's sugar loaf, really does look like paradise.

Ticino is easy to reach by train. Thanks to the Gotthard Base Tunnel, the trip from Munich to Lugano takes about six hours, and from Frankfurt to Locarno six and a half. With the Ticino-Ticket, holiday guests travel free of charge within the canton by bus and train; the ticket is given to those who stay in hotels, youth hostels or campsites that take part in the project (ticino.ch/ticket).

With "Lugano à la carte", the four five-star hotels in Lugano offer two nights including a four-course dinner with Ticino wines and another dinner in one of the other hotels, bookable here: "Splendide Royal", "Villa Principe Leopoldo". ", "Villa Castagnola", "The View" and in the "Swiss Diamond Hotel", 1790 francs for two people in a double room (luganoregion.com/de/angebote/lugano-a-la-carte).

The region's website lists comparatively cheap accommodation (from hotels to farms); at ticino.ch/de/campaigns/20-percent.html there are hotels with a 20 percent discount on the daily price. "I due Sud": The tasting menu "Il Pomodoro che non c'e" costs 182 Swiss francs in the Lugano star restaurant (splendide.ch), in the "Arté al Lago" there is a six-course tasting menu for 145 francs (villacastagnola .com). ticino.ch/de/explore/gastronomy.html provides an overview of restaurants, inns, typical products and food tours; Information about the gin from the Muggiotal at bisbino.ch.

Participation in the trip was supported by the Lugano Region and Ticino Turismo. You can find our standards of transparency and journalistic independence at go2.as/independence

‹ ›
Keywords:
KastanienWeinTessinMaronenGerichteOlivenbäumeWanderurlaub
Your comment has been forwarded to the administrator for approval.×
Warning! Will constitute a criminal offense, illegal, threatening, offensive, insulting and swearing, derogatory, defamatory, vulgar, pornographic, indecent, personality rights, damaging or similar nature in the nature of all kinds of financial content, legal, criminal and administrative responsibility for the content of the sender member / members are belong.
Related News