The 1st Festival of Solidarity Quesada por Guatemala will be held in Jaen, Quesada, November 2nd and 3. 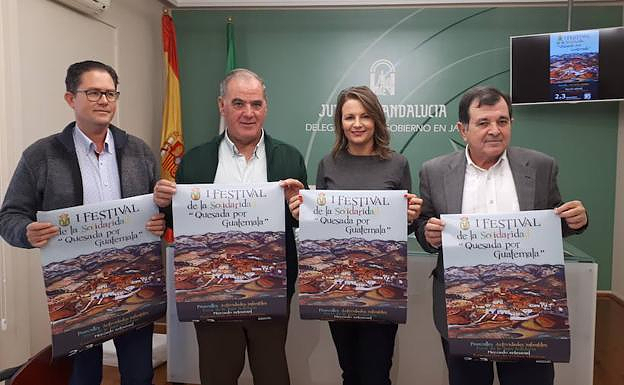 The 1st Festival of Solidarity Quesada por Guatemala will be held in Jaen, Quesada, November 2nd and 3. It is being promoted by the City Council as well as the NGO Quesada Solidaria. Since 2002, Quesada Solidaria has been operating in Central America with several expeditions made up of Andalusian Health Service (SAS), and with the cooperation of the Board.

Ana Cobo is the Andalusian Government's Delegate in Jaen. She has also participated in the presentation with Manuel Vallejo, the mayor of Jaen and Basilio Duenas (founding partner of the NGO) who is also the coordinator of Jaen University Complex's Breast Unit.

Ana Cobo stated that the purpose of these activities was to raise as much money as possible while promoting values such solidarity and commitment among participants and attendees.

Cobo highlighted the fact that the Andalusian government has already acknowledged the work of Quesada Solidaria with the delivery of Flag of Andalusia 2014 for its altruistic work in providing basic health care in Guatemala and Nicaragua and taking on new educational and social projects.

"This summer, the sixteenth expedition of health workers from the NGO to Central America were carried out to, on that occasion, help mitigate the damage caused in Guatemala by Fuego volcano. As in each expedition, The Andalusian Medical Service provided the material as well as the medication necessary to complete this charitable and altruistic task," he said.

Quesada Solidaria is also supported by the Board through help lines operated by the General Directorate of Volunteering and Citizen Participation and the Ministry of Education. This helped to provide school materials withdrawn from Andalusian educational centres and sent to schools in San Rafael of Nicaragua, the North. Cobo said that there were more than 58,000 kilos of furniture and other items. This material was meant to improve teaching conditions in rural areas of Central America.

The mayor spoke out about the "participatory" and "hospitable" nature of Quesada residents and stressed the need to promote such an initiative. This type of initiative is open to all audiences and includes family activities to help "the most young people learn values like solidarity, respect, and equality>>. He thanked all the social, cultural, and sporting groups who participated in the two-day activities. These included a children's theatre, artisan market, and tapas fair.

Basilio Duenas thanked both the Board and Provincial Council for their support. He also described the main actions of NGO in countries where it intervenes. This included sending more than a dozen containers with material and, fundamentally speaking, sanitary and medical supplies. Duenas insists that all collected funds will go directly to the project at destination because there are no intermediaries, and they work directly alongside the Quesada Solidaria delegation in these countries.

‹ ›
Keywords:
FestivalBeneficoNoviembreRecaudacionQuesadaSolidaria
Your comment has been forwarded to the administrator for approval.×
Warning! Will constitute a criminal offense, illegal, threatening, offensive, insulting and swearing, derogatory, defamatory, vulgar, pornographic, indecent, personality rights, damaging or similar nature in the nature of all kinds of financial content, legal, criminal and administrative responsibility for the content of the sender member / members are belong.
Related News