Champagne: in Ile-de-France too, it's harvest time!

To unearth where these prestigious grapes grow, you have to get out of the Parisian hubbub, head east, wait for the myriad of warehouses to vanish so that three villages take shape on the borders of Seine-et-Marne. 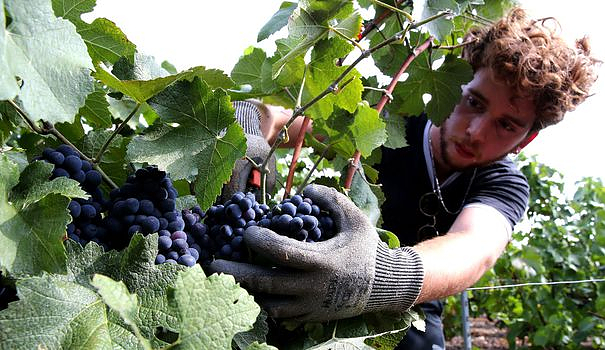 To unearth where these prestigious grapes grow, you have to get out of the Parisian hubbub, head east, wait for the myriad of warehouses to vanish so that three villages take shape on the borders of Seine-et-Marne. of the Marne Valley.

Saâcy-sur-Marne, Nanteuil-sur-Marne and Citry are the only three crus of the controlled designation of origin (AOC) to be located in Ile-de-France, on clay-limestone soil favorable to pinot meunier, which gives the wine lively and fruity notes.

In Saâcy-sur-Marne, Vincent Ernould is in full swing. The harvest began Friday on the two hectares of the family vineyard. "It's a good year, we have grapes! The bunches have fairly homogeneous grains, the sanitary condition is perfect", he rejoices.

"No one imagines that we make champagne in Ile-de-France, in Seine-et-Marne. For many, champagne is Marne, a little bit Aisne", confides this 39-year-old winemaker who took up, with his brother and his sister, the torch of the patriarch. "Out of passion", specifies Mr. Ernould, whose main activity remains real estate.

Between the vines, a dozen pickers work in a precise and rhythmic ballet.

"People are not necessarily aware that there are winegrowers in Seine-et-Marne, we teach them, it's funny!" Confirms Sandra Bansept, 28, orange secateurs and bucket in hand.

"It's hard but it feels good! Here I don't have a phone, I drop everything... After the night we close our eyes and dream of grapes", smiles the young woman, who lives nearby. She has been involved in the harvest for ten years, stimulated by "the good atmosphere".

Out of more than 15,000 winegrowers who make up the viticultural champagne, "only 13 operators are listed in the department", counts the Champagne Committee, the interprofessional organization of the appellation.

"The whole represents 92 hectares in production, or 0.27% of the total Champagne vineyard", specifies this source.

Also established in Saâcy-sur-Marne, Gauthier Bombart, 27, remembers his wine studies, raising his hand to recall the existence of the Ile-de-France region. From now on, Hervé Bombart champagne - named after his father, whom he is gradually taking over - is on the menu of a starred restaurant in Yvelines.

"For a long time it was a defect (being in Seine-et-Marne, editor's note), we were criticized for being far away, for being on a little-known land, and today it's a real strength in the sense that we have a real identity", he believes while presenting his cuvées.

A champagne is "the reflection of a terroir and the way in which it has been worked", underlines this oenology enthusiast, "proud to be able to represent a micro-terroir" on this side of Champagne.

For his part, Vincent Ernould sells 90% of his harvest, after pressing the bunches on the farm, to a trading house in Épernay (Marne), to be incorporated into various recognized brands.

He too had to fight against "the preconceptions". "Like saying that good champagnes come from Grande Champagne, Reims, Épernay, the Côte des Blancs... And not from outlying crus. But I say the exact opposite. There are champagnes around 10 km away which have nothing to envy to the big houses."

"Each winemaker is unique, each winemaker has his own culture, his own philosophical way of making wine and working in his vineyards because we must not forget that everything starts from there", recalls Gauthier Bombart.

To date, 60% of the grapes harvested allow him to produce 30,000 bottles. The other part is sold to the trade.

In the future, the young man aims to produce more bottles on the Seine-et-Marnaise estate and thus continue to promote the most confidential wines of this world-famous appellation.