Issa Sallet Adoum, Ousman Yaouba and Tahir Mahamat, members of one of the most powerful armed groups which have terrorized populations for years, the 3Rs (Return, Reclamation and Rehabilitation) and accused of the massacre of 46 civilians in the villages of Koundjili and Lemouna (north-west) on May 21, 2019, were notably found guilty of "murder", "inhumane acts" and "humiliating and degrading treatment". 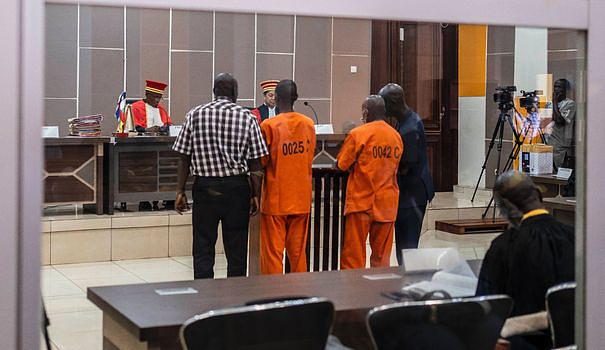 Issa Sallet Adoum, Ousman Yaouba and Tahir Mahamat, members of one of the most powerful armed groups which have terrorized populations for years, the 3Rs (Return, Reclamation and Rehabilitation) and accused of the massacre of 46 civilians in the villages of Koundjili and Lemouna (north-west) on May 21, 2019, were notably found guilty of "murder", "inhumane acts" and "humiliating and degrading treatment".

The first was sentenced to life imprisonment and the other two to twenty years' imprisonment for "crimes against humanity" and "war crimes".

Issa Sallet Adoum, was also found guilty in his "capacity of military leader" of the "rapes committed by his subordinates", specifies the press release of the CPS.

Me Manguereka André Olivier, speaking on behalf of the defense lawyers, indicated "to take note of the verdict" and announced his intention to "appeal", describing the decision as "half a victory". The Court had requested life imprisonment for the three defendants in August, a sentence to which only Mr. Sallet Adoum was sentenced.

The SCC was created in 2015 by the government under the sponsorship of the United Nations to try war crimes and crimes against humanity committed since 2003, it opened this first trial on April 25.

"We are very satisfied with the verdict, it is a message for the executioners: sooner or later justice will rule on their actions," said AFP Me Fernand Made-Djapou, coordinator of the coalition of social organizations. civil for the CPS, civil party to the trial.

"I lived through the Koundjili attack, where my big brother (...) was killed like 13 people I knew," a 34-year-old man told AFP, on condition of anonymity. "I am happy with this decision and that the Court has mentioned the cases of rape of which six of my sisters were victims", he underlined.

Tahir Mahamat, one of the three defendants who claims his innocence, appeared weakened at the hearing on a stretcher after having started a strike of the end for 21 days, noted AFP journalists. The defendants have three days to lodge an appeal, specifies the Court which acquitted them of the counts of "torture as a war crime".

The Minister of Justice, Arnaud Djoubaye Abazene, hailed this decision, described as a "triumph of justice" and which "marks a strong signal" in the "fight against impunity", he declared on the sidelines of the meeting. hearing.

The work of the CPS was launched in October 2018 with the first surveys. This special court is made up of judges and prosecutors originating - in addition to the Central African Republic - in particular from France, Togo and the Democratic Republic of Congo (DRC).

The Central African Republic, the second least developed country in the world according to the UN, has been the scene of a civil war since 2013, very deadly in its first years but which has decreased in intensity since 2018. It first opposed militias Muslim majority united within the Séléka alliance, to others - the anti-balakas -, dominated by Christians and animists, the UN accusing both sides of war crimes and crimes against humanity.

The civil war continues today between armed rebel groups, from the Séléka and anti-balaka sometimes united, and the army of President Faustin Archange Touadéra supported by hundreds of Russian paramilitaries.