Cells responsible for relapse and metastasis in colon cancer identified

The study that is published in Nature and describes the finding demonstrates that early immunotherapy, prior to surgery, can eliminate these cells before they have started to develop a metastasis and thus prevent relapses in the disease, which opens a new way to develop new therapeutic approaches and diagnostic tools. 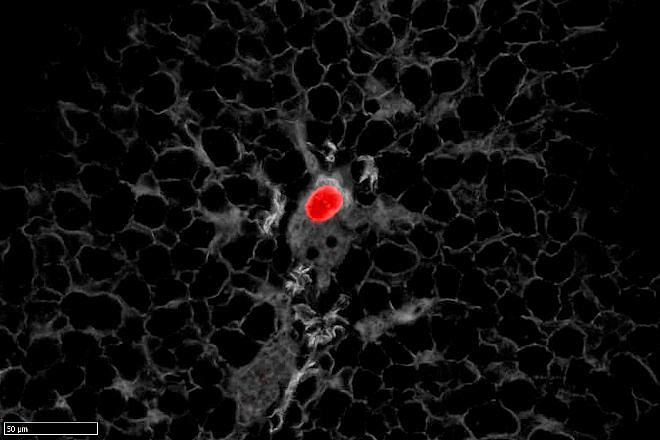 The study that is published in Nature and describes the finding demonstrates that early immunotherapy, prior to surgery, can eliminate these cells before they have started to develop a metastasis and thus prevent relapses in the disease, which opens a new way to develop new therapeutic approaches and diagnostic tools.

"Understanding and avoiding the phenomenon of relapses after surgery is an unresolved medical need. After many years investigating colon cancer, we have taken a first step to prevent metastases in patients who present with localized disease," he explains. In a statement, Eduard Batlle, head of the Colorectal Cancer laboratory and group leader at the Cancer CIBER (CIBERONC) at IRB Barcelona and coordinator of the study.

The research has been co-financed by the La Caixa Foundation, the TV3 Marathon, the Spanish Association Against Cancer (AECC), Cancer Research UK, the Spanish Ministry of Science and Innovation and the European Research Council.

"Most of the research in colorectal cancer has focused on understanding the primary disease (how cancer originates). In recent years there have also been important advances in the characterization of metastatic disease, but until now it had not been possible to address the investigation of this small population of tumor cells that is disseminated and that is invisible to the diagnostic techniques used in the clinic", the researchers point out.

"This lack of knowledge has resulted in a lack of effective therapies to eliminate residual disease and prevent metastatic recurrence, which have a poor prognosis. With this work, residual tumor cells hidden in the liver and lung have been identified for the first time, and they have characterized how they evolve until giving rise to the appearance of metastases in these organs".

Scientists have recreated in laboratory mice the process followed by patients who suffer relapses and at the same time have developed a methodology that makes it possible to isolate a tiny fraction of disseminated tumor cells hidden in the body.

"Our model, very similar to the progression of the disease in patients, has allowed us to characterize the primary tumor and the dynamics of the residual disease. We have studied from micrometastasis of 3 or 4 cells, to medium-sized or even larger metastases, characterizing how each of them evolves during the progression of the disease", adds Adrià Cañellas-Socias, a researcher from the same laboratory and first author of the study.

Scientists have known for years that colon cancer is made up of different types of tumor cells, which perform different functions during the progression of the disease. Within the amalgamation of cell types that forms colon cancers, researchers have identified a population, which they have called HRCs for its acronym in English (High Relapse Cells or Cells with a High Probability of Relapse).

These cells have little proliferative activity and do not contribute to the growth of the primary tumor. However, clusters of HRCs are capable of shedding cancer in the colon, migrating to the bloodstream, reaching the liver, and remaining hidden for some time after surgery. Researchers have been able to verify in samples from patients with colon cancer the presence of these same cells in patients who have a higher risk of recurrence of the disease after treatment.

Once identified, eliminating them through genetic modification techniques prevents the formation of metastases; that is, the mice that develop colon cancer remain free of disease after surgery of the primary tumor, without suffering relapses. The team has also developed a therapeutic strategy to specifically eradicate residual disease and prevent recurrence; show that incipient metastases, when they are not yet visible, can be eliminated by treatment with immunotherapy, prior to surgery.

"Our discovery reveals for the first time how the group of tumor cells responsible for relapses behaves, as well as the genes that define them", says Batlle, who suggests a revision of the clinical guidelines in the treatment of this type of cancer because, in many cases, it would be advisable to apply immunotherapy before surgery.

The studies are now focused on studying when the HRCs that have reached the liver are "activated" to regenerate a tumor, with the intention of interfering with this process and preventing the formation of metastases, and also being able to understand what factors influence in the appearance of these cells and why their number varies from one patient to another.

‹ ›
Keywords:
DirectivosestilovidasaludSalud Investigación MédicaCáncer De ColonSalud Y CienciaCiencia Y Salud
Your comment has been forwarded to the administrator for approval.×
Warning! Will constitute a criminal offense, illegal, threatening, offensive, insulting and swearing, derogatory, defamatory, vulgar, pornographic, indecent, personality rights, damaging or similar nature in the nature of all kinds of financial content, legal, criminal and administrative responsibility for the content of the sender member / members are belong.
Related News