Cazorla streets are adorned with art

This weekend's II Festival '7 Arte en Circuito’ is a defining moment for live arts in Cazorla. 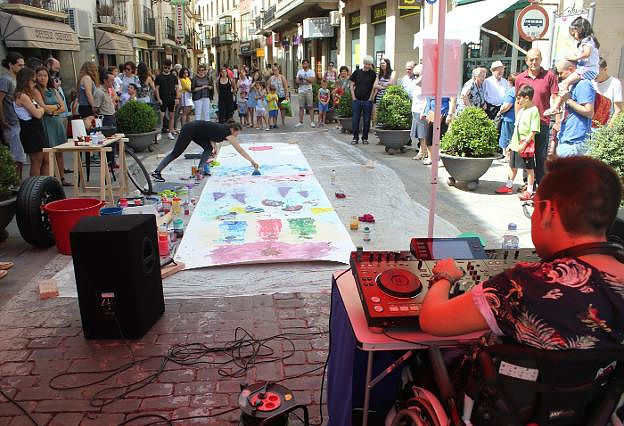 This weekend's II Festival '7 Arte en Circuito’ is a defining moment for live arts in Cazorla. The presentation on Friday night, as well as the opening of the exhibition I give you your difference II' by Paco Milla and Xtobal, was concluded. Yesterday's morning and afternoon saw the rest of the activities begin to unfold.

Alvaro DJ and Marta Moreno, two young artists, poured their passions into the busy Doctor Munoz Street from 11 AM. The combination of music and painting created a sonic explosion that left no one indifferent. Marta Moreno was there with her spatulas, brushes, wheels and wheels to help Alvaro DJ set up his mixer.

Two and a quarter hours of dedicated effort were put into several works: the musical, performative and pictorial. The latter was divided into several works and will be raffled at the Teatro de la Merced at 12 noon today to support the ALES association for cancer children. Another detail that highlights the inclusive nature this festival is that people with disabilities or groups that require special protection are the protagonists.

CUVO, an eight-piece video-art festival featuring works by international artists, is being projected in the Plenary Hall, the town hall's main hall, and elsewhere in the city. It is a crucible of avant-garde art, sure to leave no one indifferent. Same goes for the video-art work by Seba Mannjon from Cazorla called 'No, no'. There will be many details to discuss.

You can also enjoy two additional plays during the three-day festival: 'Weavers of Dreams' in the Ruins of Santa Maria and 'Little Babel’ in the Teatro de la Merced. The first is the creation of Art Baccalaureate student, a network made of colored threads which sews the entire historic space to showcase some of the imaginative and innovative machines these young artists have created. The second is a collection of works composed and authored by Xtobal, but made by all of the Cazorla school boys and girls. This young art is a sign of a bright future for the municipality's culture.

‹ ›
Keywords:
ArteColoreaCallesCazorla
Your comment has been forwarded to the administrator for approval.×
Warning! Will constitute a criminal offense, illegal, threatening, offensive, insulting and swearing, derogatory, defamatory, vulgar, pornographic, indecent, personality rights, damaging or similar nature in the nature of all kinds of financial content, legal, criminal and administrative responsibility for the content of the sender member / members are belong.
Related News