Nearly 150 international experts will meet in Cazorla (Jaen), next Sunday, to share their experiences with the European bearded vulture project reintroduction. 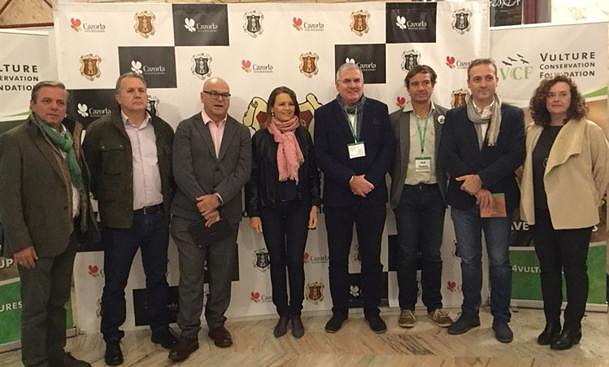 Nearly 150 international experts will meet in Cazorla (Jaen), next Sunday, to share their experiences with the European bearded vulture project reintroduction.

The Vulture Conservation Foundation organized this congress in collaboration with the Ministry of the Environment and Territory Planning and the Cazorla Municipal Council. It began with Ana Cobo, the Government delegate to Jaen, Francisco Javier Madrid, the general director of Management of the Natural Environment and Protected Spaces and Antonio Jose Rodriguez, the mayor of Cazorla.

Cobo appreciated the fact that this meeting was held in Cazorla. The delegate stated that it was deserved for the Board's work since 1986 when the vulture died. She also acknowledged the importance of their work in preserving the biodiversity of Cazorla, Segura, Las Villas, Castril mountain ranges as well as the balance of the trophic chain for the survival and future generations of other species. She has mentioned the establishment of the breeding center at Nava de San Pedro, in 1996.

He stated that the program's success was due to the scientific and rigorous work of the Gypaetus Foundation professionals with the support of the Ministry of the Environment.

Cobo also took the opportunity to remind the public about the importance of healthy mountains. He defended his claim that mountains contain all the species needed to feed their food chains, and one of these is the vulture.

Francisco Javier Madrid, for his part, has highlighted the efforts of the Board in bringing the best and most experienced experts in necrophagous bird research from Europe and other parts of the world to Cazorla through the meeting.

Madrid stated that "it is a recognition by the people of Cazorla Segura and Las Villas of the Parque de Castril, and, ultimately of the citizens who reside in these towns, who have been working for the reintroduction program for more than 38 year," Madrid said. This has highlighted the Board's clear commitment to the bearded and necrophagous bird reintroduction project as an element of economic growth in the territory. He exemplified, "We believe it is working, considering the growing number nature tourism companies that have been implemented."

The first day will feature presentations about the threatened species. The second day will focus on the Andalusian autonomous group's work in Andalusia. Day three will focus on the publicizing of the Andalusian project in the natural environment. The Bearded Vulture Captive Breeding Center will present the territory they occupy and demonstrate dog patrols to show the fight against poisoned baits.

The meeting is being held at Cazorla Theatre and includes researchers and technicians from Spain, Italy, Germany and Switzerland.

The Ministry developed the Bearded Vulture Reintroduction Program to help achieve an autonomous, stable population in the region. This is done through the release and hacking of young specimens.

You should also know that some of the individuals released to the natural environment are from the Captive Breeding Center of Cazorla, (Jaen), which was established by the Ministry of Environment and Territory Planning in 1996 and is managed by the Gypateus Foundation in order for the establishment of a sustainable and independent population of the species. Part of the chickens kept in captivity are used to develop the Reintroduction Projects for endangered species in Europe.

Like other endangered species, the bearded vulture is an important resource for tourists who specialize in bird watching. The recovery of this species will result in increased economic activity in rural areas that have great potential, which favors socioeconomic development.

‹ ›
Keywords:
ExpertosInternacionalesDebatenCazorlaSobreProgramasReintroduccionQuebrantahuesos
Your comment has been forwarded to the administrator for approval.×
Warning! Will constitute a criminal offense, illegal, threatening, offensive, insulting and swearing, derogatory, defamatory, vulgar, pornographic, indecent, personality rights, damaging or similar nature in the nature of all kinds of financial content, legal, criminal and administrative responsibility for the content of the sender member / members are belong.
Related News