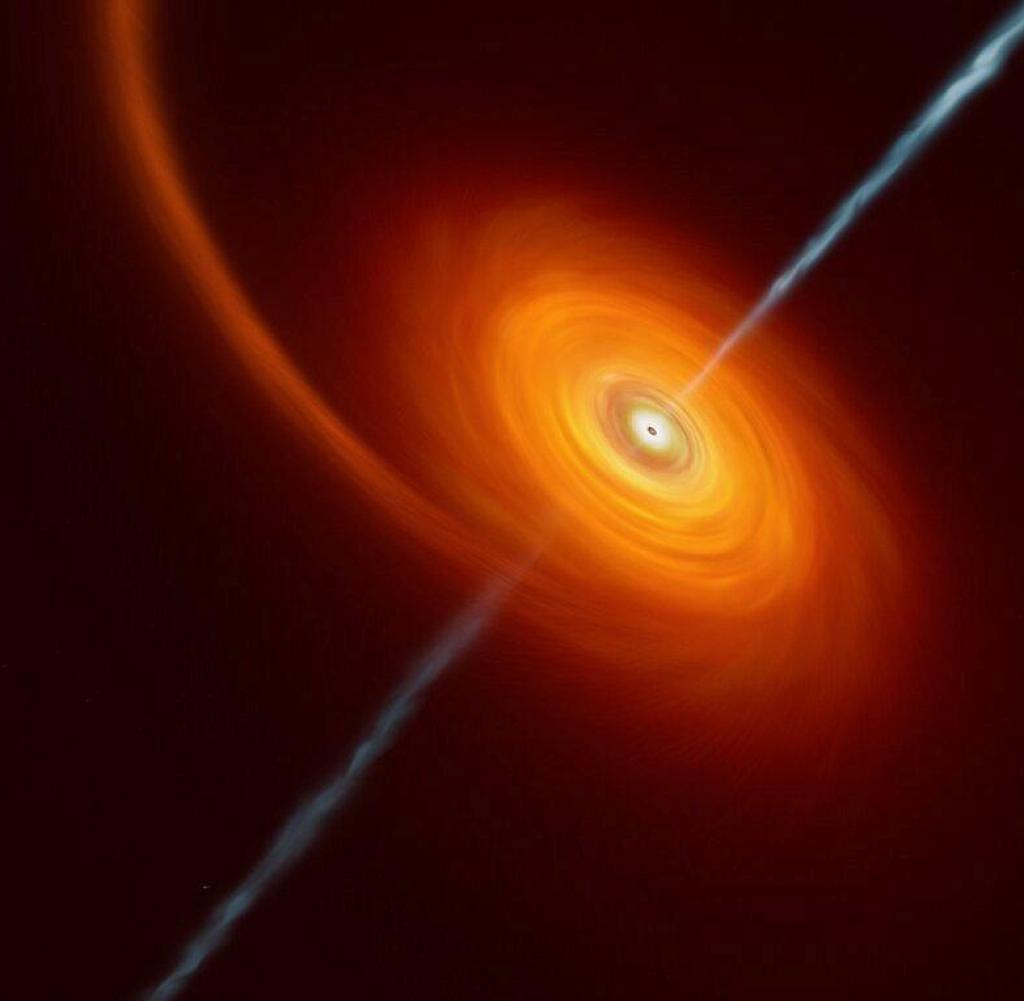 12.4 billion years ago, a catastrophe occurred in the still young cosmos: A very massive black hole in the center of a galaxy tore a star apart with its gravity. Using numerous telescopes on Earth and in space, astronomers were able to pick up the radiation from the distant event in February this year. As the scientists report in the journals "Nature" and "Nature Astronomy", the catastrophe produced a high-energy beam of matter that was aimed almost exactly at Earth.

When a black hole tears apart a star - astronomers speak of a "tidal disruption event", or TDE for short - the debris falls into the black hole and lights up brightly. The sky researchers have now registered almost a hundred candidates for such events. In rare cases, the black hole's magnetic field can shoot some of the infalling stellar matter, known as a highly focused jet of matter, far out into space.

"If by a happy coincidence the direction of such a jet coincides with our line of sight, the brightness of the event increases by several orders of magnitude," explain Dheeraj Pasham of the Massachusetts Institute of Technology in the USA and his colleagues. This allows the catastrophe to be observed from far greater distances. And that was exactly the case with the event cataloged AT 2022cmc.

The event was first discovered on February 11 with the Zwicky Transient Factory, a special telescope for detecting short-term celestial events. Astronomers all over the world were quickly alerted - and so the researchers were able to observe the distant catastrophe in all wavelength ranges from radio to X-rays. AT 2022cmc is only the fourth TDE in which such a high-energy jet has been detected - and it is the furthest distance from Earth to date.

The researchers were able to gain some information about the black hole from the strength of the energy emitted in different wavelength ranges and the slow decay of the radiation. With a maximum of ten million solar masses, it is relatively small from an astronomical point of view - black holes in galaxy centers can contain up to several billion solar masses. The data also shows that it is likely to rotate rapidly. To the surprise of the researchers, the magnetic field in the area of ​​the jet appears to be weaker than theoretical models predict. "This is a challenge for our understanding of the formation of such jets," say Pasham and his colleagues.

‹ ›
Keywords:
Apple PodcastTexttospeechUSAWeltraumSterneNature AstronomySchwarze LöcherLochGalaxien
Your comment has been forwarded to the administrator for approval.×
Warning! Will constitute a criminal offense, illegal, threatening, offensive, insulting and swearing, derogatory, defamatory, vulgar, pornographic, indecent, personality rights, damaging or similar nature in the nature of all kinds of financial content, legal, criminal and administrative responsibility for the content of the sender member / members are belong.
Related News