Juan Ramon Fernandez (acting sub-delegate to the Government) stated this Friday that traffic on El Canarete highway will be affected as "in any type of work" and that protection works against landslides are being carried out on the road parallel to the action for the rock falls that occurred since April 9. 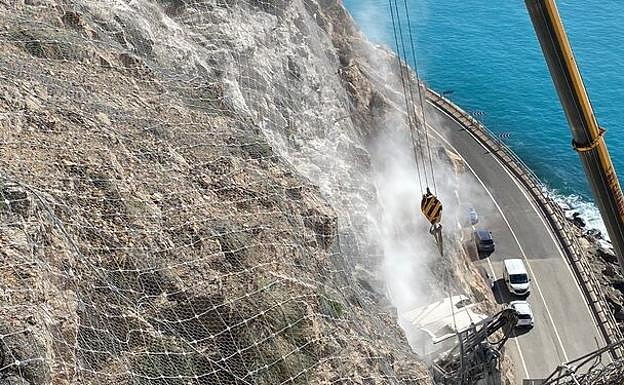 Juan Ramon Fernandez (acting sub-delegate to the Government) stated this Friday that traffic on El Canarete highway will be affected as "in any type of work" and that protection works against landslides are being carried out on the road parallel to the action for the rock falls that occurred since April 9.

"To gather that 28 months are equivalent to absolutely no circulation, that's not said anywhere," the acting subdelegate stated in statements to Europa Press regarding the action report. This project foresees "interferences in the existing traffic in most works performed>> during its eleven stages.

The document describing the work awarded to Elsamex-Geotalud at 689,199.08 euro states specifically that to complete the various works, "it will be necessary for completely cutting off the road" due to the need to stockpile material and for safety for road users.

Fernandez said that the possibility of circulation within the area will be evaluated as the action proceeds. Fernandez stated that "the solutions, as on previous occasions, were many." He also recalled the previous opening of one lane at times that didn't coincide with the work being done on the ground.

It has also argued that, although the "maximum period" for works is 28 months, this circumstance doesn't correspond to traffic cuts for the same period. Instead, it will be applied "as seen" and based upon whatever is "necessary" for the execution.

Europa Press was able to access a document that stated that the road closure would be done in "different phases" to allow for the work to be completed "while maintaining accessibility to existing residents and businesses along the road at all times." The contiguous actions were grouped together under the condition that there is no trade, access or residence between them.

A total of 11 actions were designed to prevent new landslides. These, along with existing protections throughout the section, serve the main purpose of reducing the likelihood of detached rocks reaching vehicles. Some of the elements that are already damaged can also be replaced.

Six phases will be used to close the road completely, in order to address the 11 actions. An average of 15,000 vehicles travel through the road each day. The A-7 Mediterranean Highway will divert the affected vehicles, while N-340a, which is the object of the works, will be marked prior to the cutting. Signs will also be placed in Almeria and Aguadulce.

Protection against landslides is a key component of the project's actions. They are based on passive protection systems such as dynamic screens and other assets like cable networks, triple torsion meshes reinforced, and hanging ones.

The project details the problems found at each of the kilometer points, along with their particularities (e.g., proximity to tunnels, inhabited spaces) and the possible solutions to avoid new rock fall, including the installation of barriers, extension or clearing of existing ones, as well as other options.

‹ ›
Keywords:
ObrasEstarMesesCarreterasCanareteDesmienteVayaCortadoDuraran
Your comment has been forwarded to the administrator for approval.×
Warning! Will constitute a criminal offense, illegal, threatening, offensive, insulting and swearing, derogatory, defamatory, vulgar, pornographic, indecent, personality rights, damaging or similar nature in the nature of all kinds of financial content, legal, criminal and administrative responsibility for the content of the sender member / members are belong.
Related News