"Cargo 200", in search of the remains of missing Ukrainian soldiers

The expression appeared in the Soviet army during the war in Afghanistan (1979-1989): according to one of the theories, the number 200 refers to the 200 kilos that an average soldier would weigh in a military zinc coffin . 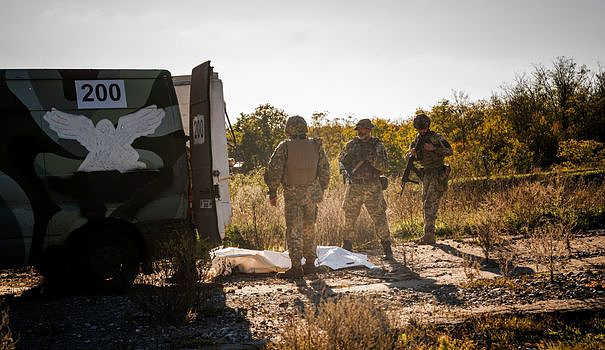 The expression appeared in the Soviet army during the war in Afghanistan (1979-1989): according to one of the theories, the number 200 refers to the 200 kilos that an average soldier would weigh in a military zinc coffin .

Andriï Tcherniavsky, at the head of this specialized unit of the Ministry of Defense in the Donetsk region, rushes on a rutted road of shell craters, charred trees and ruins of tanks, towards Sviatoguirsk, liberated at the end of September after three months of Russian occupation.

In this sector, in seven days, Mr. Tcherniavsky, has already brought back 19 bodies of Ukrainian soldiers who have been missing for months, it was previously impossible to get to the occupied zone.

The basis of this expedition is an interactive map with yellow dots associated with GPS coordinates. Each corresponds to information provided to the command by soldiers, at the time of withdrawal, on a body left or buried in combat.

In an isolated house in the village of Oleksandrivka, the convoy stopped and the teams inspected the premises, occupied by the Ukrainians, then by the Russians, judging by the rubbish and ammunition found.

“We know that part of the 81st brigade and border guards withdrew from their positions in this house” on April 24 and 25, explains Mr. Tcherniavsky. Among other things, he is looking for the body of a buried soldier that his comrades were unable to take with them during their exfiltration march.

For this kind of complex search, a canine brigade specializing in the exhumation of the dead accompanies the Cargo 200 team.

In a few minutes, after sniffing the garden, Professor, a young Belgian shepherd, stops under a tree and frantically digs the ground with his two front paws.

The body, 50 cm underground, was buried in a blue sheet, a pillow to support his head.

"This kind of ritual is rarely possible, we are very lucky, the body is well preserved," said Andriï Tcherniavsky, already squatting at his bedside.

But things get even more complicated when on what remains of the remains are removed three military jackets. "On each jacket there is a chevron with a different name", explains Andriï.

To hope to formally identify this soldier, the DNA will be entered into the database of the Ministry of Defense, made up of samples provided by the families of soldiers "disappeared" at the front.

"As soon as we have a DNA test and a match we will be able to find out who this man is," he explains.

Andriï Tcherniavsky began this job 20 years ago within an NGO specializing in the identification of the remains of Soviet and German soldiers who died on Ukrainian soil during the Second World War.

At the start of the Donbass war in 2014, he joined the army to provide his expertise on the collection of military remains.

"We must find each of our dead. This is my watchword. There can be no missing," he said. "Everyone deserves the last honors", even the Russian soldiers, whose corpses he also collects, "in accordance with international law".

Andriï is known on the front and his van is often stopped by soldiers.

In the barely recaptured ghost town of Chandrygolové, one of them guides him to a very isolated farm, a cable in his hand. This will serve as a lasso to pull the corpse a few meters and check that it has not been "mined" by the enemy, a dreaded practice in liberated areas.

On a carpet of autumn leaves, lies in the greatest solitude a bloated Ukrainian uniform which contains no explosives. Next to it, a shell crater. Around, a scattered package.

"There, what happened is quite obvious", comments the deputy of the team, Oleksandre Lovyniouk, 53, unfolding the white body bag.

The dead soldier's helmet lies next to it, empty, a few hairs stuck in it.

The team will spend 30 minutes, in a heavy silence, combing the surroundings, trying, in vain, to find their heads.

“Behind each of our research, each of our efforts, we try to remember that the mourning of a loved one depends,” recalls Laryssa Boryssenko.