Carbon, the hope of a giant photovoltaic panel factory in France

"We can no longer be dependent on China for such a strategic product!" Says Pascal Richard, CEO of Carbon, interviewed by AFP. 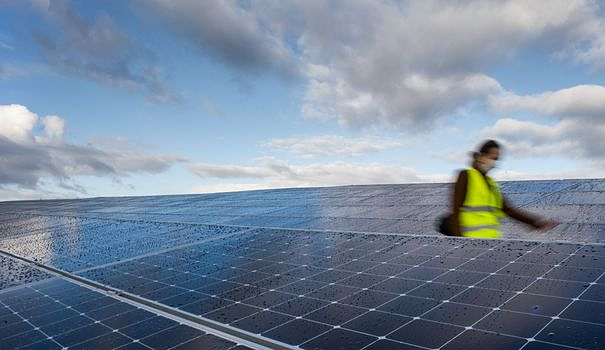 "We can no longer be dependent on China for such a strategic product!" Says Pascal Richard, CEO of Carbon, interviewed by AFP.

Nine of the world's top ten manufacturers are Chinese and South Korean, backed by their huge domestic markets.

The solar panel, in fact, is at the heart of French and European energy projects.

A bill "accelerating renewable energies" must be presented in mid-September to the Council of Ministers.

It provides for the multiplication of the possibilities for installing solar panels (compulsory equipment in large car parks, possibility of installation on abandoned roads, etc.) and the simplification of certain procedures - criticized, moreover, by environmental NGOs.

To make up for the French delay on its European partners, Emmanuel Macron announced in February that he wanted to increase the projects tenfold to reach 100 gigawatts (GW) installed in 2050, against 13 in 2022.

And again: these objectives were set before the war in Ukraine and the widespread awareness of dependence on Russian gas, which also led the Commission in May to present its "REPowerEU" plan aimed at quadrupling photovoltaic production in the EU by 2030.

Carbon intends to take its share in this cake of "European energy sovereignty", explains Mr. Richard, former France director of the German SMA (inverters for photovoltaics).

By 2025, Carbon plans to build a first panel factory with an installed capacity of 5 GW, employing 3,000 people, and increasing to 20 GW and 10,000 people in 2030. A huge scale effect on prices, hope its founders. The implantation site - classified Seveso - is not stopped, but it will take 80 hectares.

The investment required for this fully integrated project should amount to 1.3 billion euros for the first stage, "5 to 6 billion" in total.

The hunt for investors is launched, in particular for French and European subsidies. A first fundraiser “of several tens of millions of euros” is scheduled for the first quarter of 2023. It will be used for “the establishment of teams” and “the continuation of studies”.

Mantra of the five partners in equal shares, including the Grenoble-based manufacturer of furnaces for the photovoltaic industry ECM: "the whole value chain will be integrated" once the raw material has been acquired - polysilicon from Germany or Norway in a first time.

Ingots, wafers, cells, and therefore final panels will be entirely "made in France", where other players on the European market are content to assemble Chinese components. "There is no project of this scale" in Europe, assure the leaders of Carbon.

Large energy companies are already integrating Carbon panels in their prefiguration of solar power plants, says Laurent Pélissier, CEO of ECM, "because they want to diversify their supplier portfolios and no longer find themselves in situations where there is no longer any of supply, or with suddenly changing prices".

This is the case of the Compagnie Nationale du Rhône (CNR), which announced in May a "massive" investment plan in photovoltaics (1 billion euros), via the "solarization" of roofs or degraded land. .

"At almost the same price, which will be a challenge, and equal performance, we will of course have a preference" for Carbon, affirms Julien Marchal, director of new energies, deploring to have "lost sometimes 6 months on certain projects because of the difficulties of 'supplies'.

"We would also reduce transport risk, currency risk and geopolitical risk, such as when China abruptly shut down its factories for its zero covid strategy. The carbon footprint of French panels would also be much better, all the more so if recycling exists on the spot", adds this person in charge.

In his eyes, Carbon could even become "the Verkor of solar", referring to this Grenoble start-up, supported in particular by Renault, which will set up a giant battery factory in Dunkirk.