Cantoria transforms its streets into a wonderful Christmas scene, so you can avoid activities in closed areas

Cantoria City Council launched a complete Christmas program for 2021 and 2022. 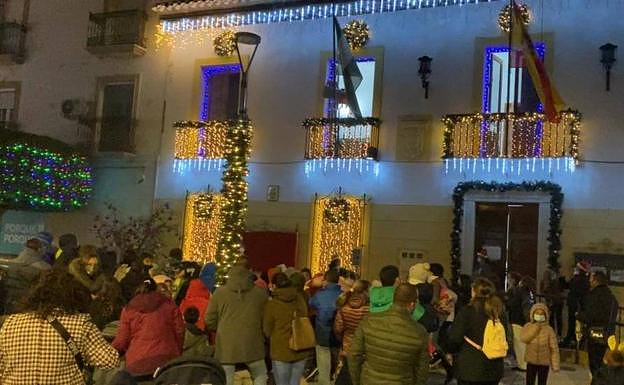 Cantoria City Council launched a complete Christmas program for 2021 and 2022. The agenda will run until January 5. It will be reviewed according to the circumstances surrounding the new Covid wave. The Christmas program will include up to 11 dates between Cantoria or Almanzora. However, they will be all on the streets to make it easier to control possible crowds. Puri Sanchez, the mayor of the city, says that while we will continue to be vigilant with our prevention efforts, it is particularly important that the Christmas spirit in children's hearts this year, and that they enjoy the festivities with their friends and neighbors on the streets."

This program began with the lighting the Christmas lights in Cantoria. It was followed by an afternoon of games for children, family gymkhana and inflatable attractions. The town hall also offered a large chocolate snack.

Friday, December 17th, will see the opening of the De Tal Palo Exhibition, an initiative coordinated and organized by Guadalinfo Center. It features grandparents and grandchildren who were photographed in situations that recall local customs and traditions.

The 20th will see the Almanzora school children decorate the large tree that has been installed by the City Council. It is possible that Santa Claus will be there. To take advantage of Santa Claus's visit to the town on Tuesday and Thursday, the Cerro Castillo School will host the Christmas Character. On Thursday, he will join the family and children's games in the Town Hall Square.

Cantorians will be called back to the streets on Sunday 26 at 12 noon. On Monday 27 December, Disney characters will take a tour of the Christmas lighting and share their experience with local children.

The royal postman will collect the letters in a new parade at half past four on Tuesday 28th. He will then repeat the task in Almanzora the next day with inflatable attractions, games for children and traditional Christmas snacks. The magic continues in Cantoria on the 30th with a show for children and adults at the Saavedra Theater.

The Christmas program's culmination will take place on January 5, with a grand cavalcade, presided over the Three Kings of the East. It will start in Almanzora at 4 p.m. and continue in Cantoria until 5 p.m.

‹ ›
Keywords:
CantoriaConvierteCallesGranEscenarioNavidenoEvitarActividadesLugaresCerrados
Your comment has been forwarded to the administrator for approval.×
Warning! Will constitute a criminal offense, illegal, threatening, offensive, insulting and swearing, derogatory, defamatory, vulgar, pornographic, indecent, personality rights, damaging or similar nature in the nature of all kinds of financial content, legal, criminal and administrative responsibility for the content of the sender member / members are belong.
Related News